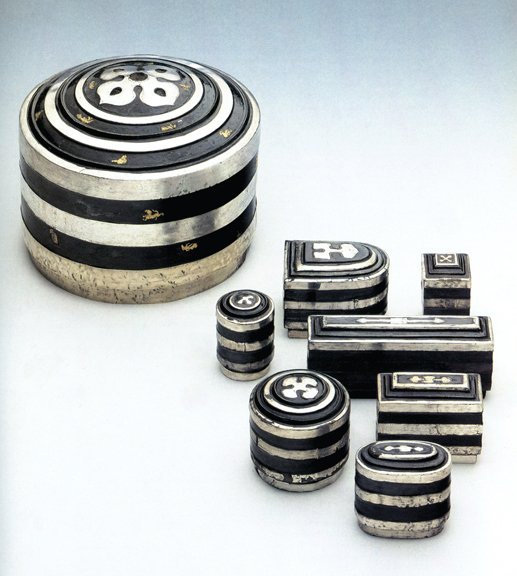 Contributing to “The Magic of Trees” was the gift of lacquer. The sap from the lac tree was discovered to be a material of potential strength, utility, and beauty. That potential was fully realized in the creation of utilitarian and decorative objects, furnishings and even paintings. The extraordinary Western Han period sets of cosmetic boxes (nos. 2-4), representing the first peak of lacquer production in China, were acquired when completely saturated with water and in desperate need of rescue. Concerted efforts in conservation and restoration over many years in London and Cologne yielded the stunning results observable here, returning the pieces to as close to their original glory as humanly possible. An entire millennium passed before China was to experience another peak of artistic achievement in the art of lacquer, one that occurred during the Song dynasty (960-1279). At this time, simplicity and reserve were the aesthetic hallmarks of lacquer ware, represented in the exhibition by two examples of utmost grace and purity. Decorative richness and diversity of technique, on the other hand, distinguish later Chinese lacquer styles. Carved wares in the exhibition range from a circular box decorated very unusually overall to a seal chest in the intriguing “guri” style to a large low table that would have provided an exquisite furnishing during the Ming dynasty when it was produced, as it does today. An octagonal dish and a set of five foliate dishes exhibit a range of effects achieved with painting lacquer upon lacquer, whereas the mesmerizing technique of mother-of-pearl inlay is exemplified by handsome boxes and a low table, the technique also used to stunning effect in lacquer produced in Japan and Korea, as well as in the Ryūkyū Islands, the accomplishments of the latter well exemplified in the present exhibition.
All photography by John Bigelow Taylor except for numbers 11, 16 and 17 by Yolanda Rosales