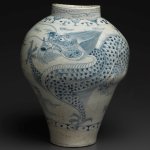 The theme of Kaikodo’s Spring 2011 exhibition, Asian Journeys, is perfectly embodied in the important, early 13th century “Portrait of Bodhidharma,” the Indian prince who traveled to China and there became the founder of the Chan (J. Zen) school of Buddhism. Among the later Chinese paintings, that by Lin Chaokai stands out, done by an artist from Canton in the far south who traveled to Beijing where he became a disciple of Giuseppe Castiglone (called Lang Shi’ning in China), who had journeyed from Milan to Beijing in service of his religious beliefs. Among the Chinese contemporary works is a “Landscape” from 1981 by Wang Jiqian (C.C. Wang), the artist-collector from Shanghai who did much to establish the importance of Chinese painting in New York, while “Rock like a Cloud,” 2006-2010, was painted by Luo Jianwu, an artist from Taiwan who lived in New York and now resides in Beijing. Japanese paintings range in date from the 17th to the early 20th century and in style between those based on Chinese models to those in purely Japanese styles. The three Korean paintings, datable between the 17th and the 20th century, were all purchased in Japan, where Yang Ki-hun, painter of the pair of charming screens, lived and worked before traveling to the United States as member of the first Korean plenipotentiary mission in 1883.

The Chinese ceramics in the exhibition date from the 3rd to the 17th century and represent types that journeyed from their homeland to such close neighbors in East Asia as Japan, Korea and South East Asia, while others went further afield to Africa and the Middle East and some to the far distant shores of Europe and the Americas. Such ceramics as Yue celadons and yingqing wares, and later underglaze-blue decorated porcelains, were not only treasured in foreign lands but also provided inspiration for the birth and development of ceramics styles and industries outside of China. The Vietnamese tradition of underglaze-blue decorated ceramics clearly depended upon what was learned from China’s Jingdezhen wares but what is most striking was the emergence, almost at the outset of production, of a native Vietnamese spirit and approach to ceramic creation as manifested in a 15th-16th century dish from the John R. Menke collection. Another important work from the Menke collection is a 12th century Korean maebyong, characterized by a delicately incised design and very lovely grey-green glaze. The roots of this creation in the Yue celadon tradition of southern China is evident and important but its Korean flavor and aesthetic even more so. While the maebyong appears to provide a contrast to another Korean ware done some six centuries later, which is notable for its exuberant and most expressive dragons painted in underglaze-cobalt blue, the dragons are rushing madly away from their Chinese ancestors and into the freedom of their own tradition, and share this independence with their gentle 12th-century celadon predecessor.

Asian Journeys thus touches on some of the important ways and means in which ideas, themes, artists, and artifacts transcended national boundaries and took up influential residence abroad, with greatly varying levels of significance.