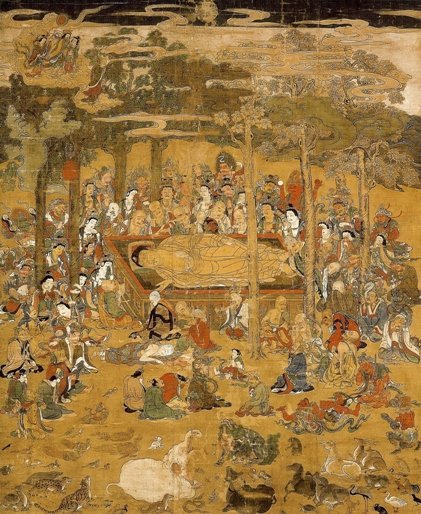 The theme of this exhibition, “A Natural Selection,” was initially intended to emphasize the world of natural creatures, by and large excluding humans. Paintings and objects were thus selected for inclusion that presented these animals, birds, and creatures in forms varying from the most realistic to the extremely abstract. As preparations for the exhibition progressed, however, other meanings and interpretations came into play, and ideas on the evolution of the various arts determined the addition of a number of additional pieces.

There were many highlights in this exhibition which included Chinese earthenwares, stonewares, porcelains, and metalwares from the Bronze Age to the Tang, as well as later Chinese textiles. An exquisite Song-dynasty fan painting, “Butterfly and Roses,” and an anonymous landscape fan painting with an old attribution to Li Tang, represented the early Chinese academic tradition, while a striking painting by Lu Ji in hanging scroll format of colorful camellias growing by rocks and bamboo, all blanketed by snow, represents the Ming court or academy style.

Later paintings ranged from Lan Ying’s rendition of old-master paintings in a pair dated to 1661 painted on silk, the landscape elements filling the surface, to a spare and refined album of pine, plum, and bamboo paintings on paper also dated to the 1660s. The latest Chinese painting in the exhibition was by the contemporary master Zhu Daoping in which the slender autumn waterfall which was the subject of the painting vied with the painting as a study in color and texture. This slender stream was a great contrast to the crashing and cascading of Maruyama Okyo’s giant waterfall of 1772. The Japanese paintings in the exhibition comprehended a wide variety of styles including a monkey by Mori Sosen, a 14th-century Nehanzu (“Death of the Buddha”), and various Ukiyo-e subjects