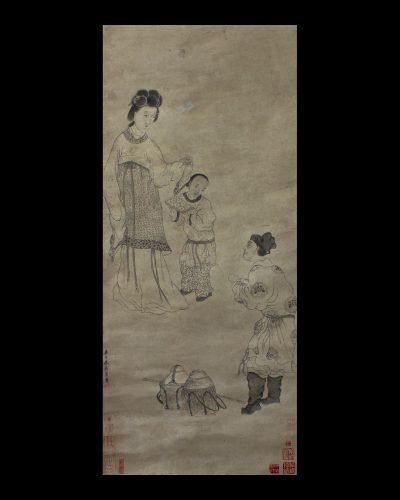 “Court Lady and Boy with Tea-peddler”

The regal figure of a woman, her hairdo and gown suggesting high status, stands with a young boy with book facing a male figure whose hands are clasped in offering. His occupation is defined as peddler by the jars at his feet, the carrying pole lying beside them. The ceramic jars with lids are embraced by woven slings that support them for carrying and also attach the lids to the jars. The slings on one jar have been loosened, allowing the lid to be removed, and it is very likely that a portion of the contents has been transferred to the cup held up by the peddler to the lady, in other words, a commercial offering of tea to the lady for her pleasure.

The lady wears a silk gown patterned with narcissus beneath a high-waisted apron with a floral diaper ground and large foliate lotus medallions, her collar, cuffs and apron with matching hooked scroll patterning. Her boy attendant wears a loose-fitting shirt tied at the waist figured with faint vine tendrils over pants with darker vine tendrils. The tea seller wears a billowing mid-length coat decorated with foliate plate medallions of peony over pantaloons with vine tendril décor.

The emphasis in the painting on finely-drawn drapery patterns, without the addition of color, identifies the approach as baimiao, “white drawing.” During the preceding Yuan dynasty this approach had been adopted by Zhao Mengfu and Qian Xuan, associating the present artist with what was then a classic approach to figure painting, prevalent before the stylistic change to the more calligraphic approach embodied in works by artists of the professional Zhe School of artists (fig. 1).

Zhu Yingchen was born in Wujiang, Kiangsu province. Early in the Hongwu reign-era (1368-1387) Zhu was awarded a mingjing degree and appointed Instructor in the Suzhou Confucian school. Zhu became known as a poet, calligrapher, and painter who specialized in the baimiao style of figure painting. A colophon by Zhu is appended to the “Pavilion of Flowering Fields” painted by Zhu Derun (1294-1365) in 1364. 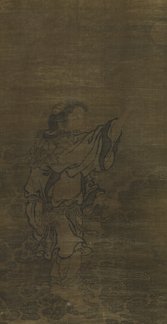