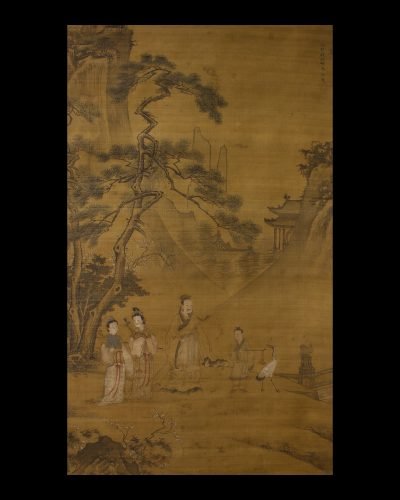 Inscription:
“Attached to the Renzhidian, Zhu Qin from Siming made this.”

Mountain peaks overlap one another to frame the scene and close off recession in depth. A tall pine rises and extends over the foreground to emphasize the figure group, which consists of a crane, a servant carrying an incense container, a scholar with staff, and two female attendants, one with a pipa (lute), the other with a ruyi “as-you-like-it” scepter. The relative size of these figures and their placement characterizes the scholar as the main subject of the painting, and he is more specifically identified by the crane and the blossoming plum. The eccentric poet Lin Bu (967-1028) of the Northern Song period lived in Qiantang, modern Hangzhou, where he kept the company of a plum tree that he considered his wife and a crane whom he believed was his son, both depicted in the present painting. Talent and eccentricity were keys to Lin’s privileged life, choosing not to serve in government but rather to live in creative reclusion on West Lake.

Many of the stylistic features originated in the Southern Song period (1127-1279)—the elongated pines of Ma Yuan and Ma Lin, the needle-like peaks of Li Tang—while the compression of pictorial space continues trends of the Yuan dynasty (1279-1368). The strokes used to texture rock and mountain surfaces—a loosened form of the so-called axe-cut texture strokes—are akin to those of Dai Jin (1388-1462), and this stylistic relationship helps to date the painting to the 15th century.

The artist Zhu Qin is not recorded in standard biographical dictionaries but the fact that he was attached to the Renzhidian, “Palace of Humane Knowledge” in the Forbidden City in Beijing, indicates that he was an artist serving at the pleasure of the emperor at the Ming dynasty court. His birthplace, Siming in Zhejiang province, was the same as that of Lu Ji (ca.1440-ca.1505), another court artist of the period, and they may have entered service at about the same time, during the Chenghua era (1465-1487). 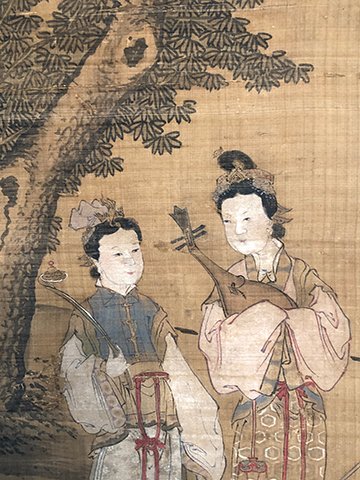