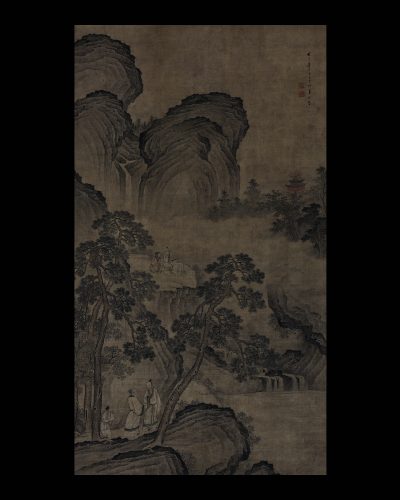 Inscription:
“Painted by Zhu Qichang at the Jade-tree Hall.”

Two scholars attended by a servant carrying a bundle of scrolls pause on a riverside path before making their way up to an outcropping overlooking the stream where wait three of their friends, talking among themselves and looking out at the splendid natural spectacle around them. The elegantly-drawn forms, the subtle texturing, and the well-honed composition here are fairly common in late Ming Suzhou school painting (fig. 1), and Chen Guan is only one among many late Ming masters of that important school.

However, Zhu Qichang, the present artist, was from Qixing in Hubei province, and it is not known at present how he gained such intimate knowledge of the Suzhou approach to painting. His precise period of activity is not clear either; although he is recorded as a painter and calligrapher of the Ming dynasty, one extant painting bears a date that is either 1628 or 1688. While the present painting could well have been executed before the end of the dynasty in 1644, it could also have been done some decades later, the work of a conservative master who continued to honor the innovations and achievements of his predecessor.