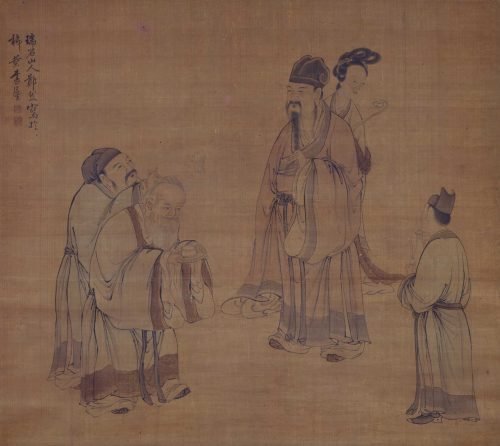 Inscription:
“Painted by Zheng Dai, called the Mountain Man from Ruishan, at the Persimmon Leaf Library.”

The most complete biography of Zheng Dai is that included in the Molin jinhua of 1871:

” Zheng Dai, zi Zaidong, hao Danquan and also Ruishi shanren, was a very good friend of Hua Yan (1682-1756). Hua Yan excelled in freedom while Zheng Dai excelled in power. In drawing men, women, flowers and plants, Zheng’s brushwork was extremely mature and muscular He inscribed one of his landscapes with the words:

Of the several branches of an old tree,
half are without leaves,
The single pavilion by water-mallows,
at the end of the day is empty;
Only the eastern egrets regularly come here,
flying back and flying forth,
they escort fallen flowers.

His nephew, Zheng Fanghui, whose name was Cicheng, was able to follow the family teachings. Within the finely regulated there was yet a plentitude of untramelled air. Unfortunately, he passed away during his middle years without having advanced the old boundaries. The Moxiang huashi takes Zheng Dai’s zi to be Zicheng and, moreover, has him as Hua Yan’s pupil: both are wrong.”[1]

The contemporaneous Huaren buyii account of Zheng is much shorter, indicating that he was not yet perceived as a master painter: ” Zheng Dai, zi Zaidong, is from Qiantang (Hangzhou). He studied the figures of Wang Shugu.”[2] Wang Shugu, the teacher of Zheng Dai, was born in Hangzhou in 1649 and was still active in 1732. Wang was a specialist in figure painting and was said to be “the only one after Chen Hongshou (1599-1652),” the late Ming artist also from Hangzhou who was one of the most renowned figure painters of his day. The painting styles of Zheng and Wang are indeed very close (fig. 1), with both artists emphasizing scholarly iconography manifested in elegant and forceful brushwork derived from such earlier masters as Zhang Lu (16th century). Zheng Dai’s style of figure painting is at times very close to that of Hua Yan, a circumstance that apparently misled the author of Moxiang huashi into thinking that Zheng was Hua’s pupil, but Zheng Dai and Hua Yan were contemporaries and friends who each made good and creative use of the five-hundred-year long Hangzhou tradition of figure painting.

The present painting portrays five figures, the most important of whom are the commanding figure of a scholar-official in the center and an older man in the lower left who offers a cup while flowers are being braided into his hair. The Japanese box-inscription for the painting identifies the main figure as Su Shi (1036-1101) in Huizhou, the modern Huiyang district of Guangdong province, the wild and barbarous region to which the great poet-statesman was banished in 1094. The older man has apparently just passed the examinations, one of the occasions on which men were graced with flowers, and is shown as he offers refreshment to his examiner and therefore teacher. The theme of Zheng’s painting is thus the absolute need and ultimate glory of upholding humanistic traditions under the most adverse conditions. 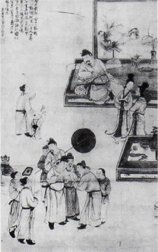