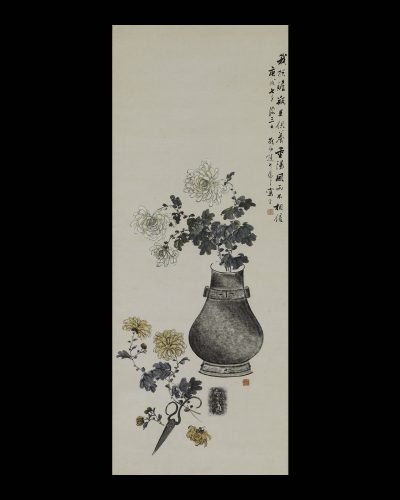 In this striking work, a rubbing of an ancient bronze hu container, complete with its inscription, is combined with painted flowers arranged so as to create the illusion that the blossoms are actually situated in the container. Additional flowers and the scissor used to trim them appear below. This combination of rubbing with painting became quite popular during the course of the 19th century when there was great interest in ancient forms of calligraphy as they appear on early bronzes and inscriptions engraved in stone. The collector’s seal found here is that of a major seal-carving association founded in Hangzhou during the 18th century.

The artist, Zhao Ruhu (d. 1917), whose name means “the Zhao who is like a tiger,” was born in Shanghai and became a pupil of the major artist Zhu Cheng (1826-1899). He is recorded as excelling in painting birds and flowers, and the present work supports that judgment while adding an element of whimsy to his repertoire.