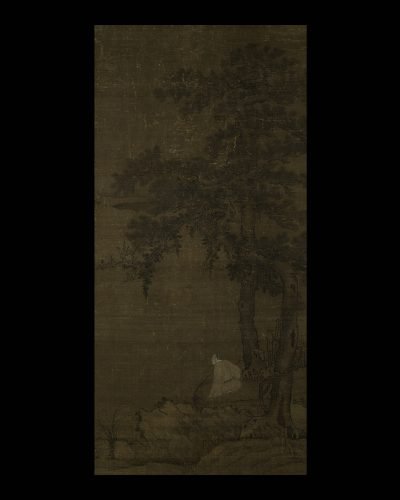 “Scholar Beneath Pines on Riverbank”
松下高士圖

Box inscription:
By the monk Ogasawara Daizen Dayū of the Shodo-in, identifying the painting as having been painted by Zhao Mengfu.

A scholar in official robe relaxes on the bank of a river, his weight supported by one arm as he leans slightly forward. A pair of pines provide dramatic contrast to the simple orchids and grasses that articulate the ground on which he sits, jutting upwards to fill the upper part of the picture; only the hint of a shoal in the upper left provides evidence of deeper pictorial depth. An even more mannered treatment of pines is found in a painting attributed to Chen Jizhi (fig. 1), a scroll painted in 1320 to commemorate a peace treaty concluded in that year at Bian Bridge.

During the Yuan dynasty (1279-1368), the period of foreign domination by the Mongols, such images as the present provided imaginative psychic releases from the political, economic, and social tensions experienced especially by the Chinese literati. Although this painting has long been associated with Zhao Mengfu, an important political figure and the major calligrapher and painter of the early Yuan era, it might seem that there is little to associate this generic Yuan image with that great master. However, a painting formerly in the Palace Museum inscribed with the name Zhao Mengfu and dated to the year 1309 (fig. 2) reproduces many of the elements of the present painting while encompassing them within a more extensive setting, from the reeds in the lower left to the additional trees on the mid-right to the mountains rising above the river in the distance. There are enough differences, however, to suggest that our painting is not simply a reduced-size version of the inscribed painting, which judging from the size of the illustrated inscription, cannot be much larger overall than the present work. Given the close compositional similarity between the two paintings, and the impossibility of examining the inscribed painting at present, it seems most reasonable to conclude that one or both of these works was based on an original by Zhao Mengfu, and that the present painting was one of the Chinese treasures brought back to Japan by some monk during the 14th century. 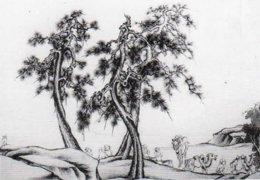 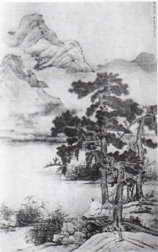