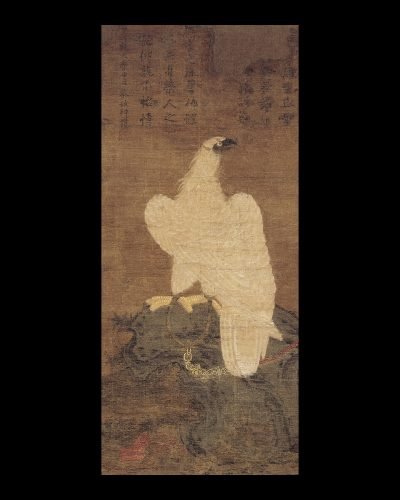 Attributed to Zhao Ji (1082-1135), the Song emperor Huizong, the painting illustrates his passion for exotic garden rocks, examples of which were shipped to the palace from all over the country, and that for auspicious birds, here the eagle tethered by chains to the rock below. Characteristic of the emperor’s style is the exactitude with which the bird and rock are detailed and the organization of the pictorial elements into a composition that serves to create an appropriate mood. The present painting, however, is difficult to date, in large part because of its poor state of preservation. A recent remounting of the painting, however, revealed the use of the fantuofa technique, which is the reinforcement of surface color in certain areas by the application of the same pigment on the reverse side of the silk. This is a characteristic Song period painting technique and is known today in works from the 12th century.