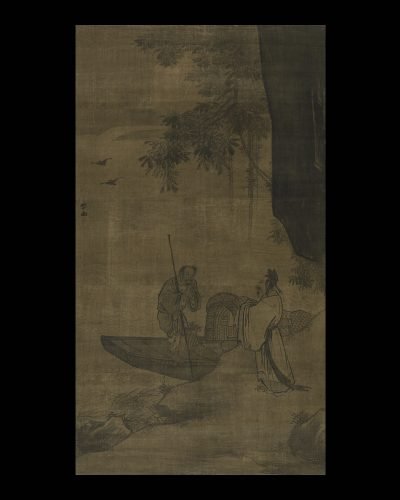 Organized along the diagonal axes of the picture, the composition features an ink-wash cliff and trees in the upper part of the painting that emphasize the figural scene below. One man in rough clothes and lacking shoes stands on a boat drawn up to the riverbank on which stands a man in scholar’s gown and hat. The two men raise their clasped hands in a mutual greeting and salutation. The figures would seem to represent two of the four basic occupations: woodcutter, peasant, scholar, and fisherman. Their attitudes of mutual respect emphasize the importance of their activities in a society in which merchants and even officials were held to play secondary roles.

There is little pictorial depth in the picture with most forms lying in or near the frontal picture plane. Although the overlapping in the background of foliage against the far river bank, and the flight of two birds to the left, gives some hint of recession, the surface of the cliff is very flat and the foreground is tipped up at a strong angle so as to further emphasize the figures and their activities. Strong and expressive brushwork is used to characterize the figures, which are more detailed than the surrounding environment.

The painter of this striking image was Zhang Lu, born in Kaifeng, Henan province. His earliest biographer, Zhu Anxian, recorded that Zhang died at the age of seventy-three. In a recent article, Shi Shouqian estimated that Zhang was born about 1490 and hence would have died about 1563. As a youth, Zhang was small in stature and was described as resolute, loyal, and generous but also somewhat conceited. Coming from a family of some prominence, Zhang embarked on the normal course of study designed for success in the examinations and an eventual career as an official. After passing an initial examination Zhang entered the prefectural school and became an official pupil. He seems to have been fairly successful and to have earned the respect of his contemporaries, but his progress ceased after he entered the National University in Beijing. Zhu Anxian, who knew Zhang personally, indicated that Zhang entered the university on the basis of inherited right, which again suggests the high status of his family; later sources state that Zhang purchased his admission. After frequently failing to pass the higher examinations, Zhang gave up and concentrated on painting.

Zhang’s early interest in painting was evidenced while he was a student, when he would draw figures and sketch landscapes on the top of his desk and on his lesson-notes. His natural talent was developed by his study of old paintings, which were likely accessible to him through family connections. After Zhang gave up his academic endeavors and decided on a career in painting, he very intelligently began by modeling his style on that of the leading professional of the day, Wang E, then serving the court as Battalion Commander in the Embroidered Uniform Guard. His early style featured figures drawn carefully with a line so fine and graceful that it was characterized as “floating gossamer.” Somewhat later Zhang came to admire and emulate the stronger, more unrestrained style of Wu Wei (1459-1508). To the graceful freedom of Wu’s style Zhang is said to have added mass and substantiality and to have surpassed the earlier master; other critics, somewhat later and from the south rather than the northern area of Zhang’s birth criticized him for capturing only the strength and vigor of Wu’s style while missing its elegant freedom. In any case, Zhang Lu’s paintings were extremely popular during his lifetime, and officials in the north, many of whom knew Zhang personally, regarded his works as treasures.

One of Zhang Lu’s earliest sponsors was Li Yue (1465-1526) who served in Beijing as vice-minister of the Ministry of War. Li invited Zhang to the official guesthouse, where he was visited by a continuous stream of high officials and nobles. Zhang then traveled extensively in the eastern and southern regions. When some natural scene caught his eye and imagination Zhang would “study it for a long while and then lay out white silk and ink. After meditating and joining his spirit (with that of the thing to be depicted), an idea would come. Holding up the sleeve of his robe he would then raise and lower the brush, inexhaustibly producing objects like Nature itself.”

When Zhang returned to Kaifeng he became a kind of recluse, like “a leopard hiding in groves and swamps, wandering abstractedly in plain cotton robe and straw sandals.” Although Zhang was a professional painter, he disliked worldly affairs, including the courtesy visits to the highly placed who might have helped with his career, and neither did he give paintings in return for gifts. According to Zhu Anxian, those who wanted a painting from Zhang had to pay their respects at his simple house. Zhang’s aversion to overt efforts to secure patronage is attested to by the eminent scholar-official Xie Hui (1489-1541), who also knew the work of Shen Zhou and Wen Zhengming:

How else could he feel about his incomparable art
but mainly to begrudge its leaving,
Not accepting even a thousand in gold
in exchange for a genuine work.
High officials fly about and spread his fame
but still do not easily get what they want,
The visits of nobles with their requests
are empty and without benefit.

Zhang did, however, enjoy painting for poets and scholars. As he once said: “Painting is simply the result of a gentleman taking pleasure in brush and ink; how can one regard it just as a commodity by means of which to secure a profit?”

All biographical sources agree that in his later years Zhang lived in retirement. The local gazetteer noted: “Although Zhang Lu was famed throughout the empire for his paintings, he lived in retirement with no way to carry on, and in the end his world was loneliness behind his door.” While that suggests a lack of success for Zhang akin to that ascribed to Dai Jin (1388-1462), Zhu Anxian states that the seclusion was intentional. Chu, who was Zhang’s neighbor, often listened to Zhang expounding on painting and connoisseurship well into the night, so the artist was not entirely without companionship.

The clearest indication of Zhang Lu’s status in contemporaneous society is gained by consideration of his relationship with his neighbor and biographer, Zhu Anxian. Zhu was a great-great-grandson of Zhu Su, who was the fifth son of Zhu Yuanzhang, the founder of the Ming dynasty. Zhu Su who had been enfeoffed as the Prince of Zhou, based himself in Kaifeng, which his descendants continued to control. Zhu Anxian was thus a member of the imperial family, in direct line of descent from the dynasty’s founder. That his daughter was given in marriage to Zhang Lu’s youngest son is a sure manifestation of the eminence of Zhang’s family. This status belies the image of Zhang suggested by a story recounted by the southerner Wang Shizhen (1526-1590). According to Wang, a high provincial official named Su became very angry when Zhang did not visit him periodically. When Zhang did go to see him, Sun induced him to enter and then clamped his left hand into a wooden device designed to extract evidence from prisoners or witnesses in court. With his right hand Zhang was then forced to paint a picture of Zhong Kui and was released from his torture only on the intervention of another official. In view of Zhang’s various associations and actual status, the story is rather unlikely and is in fact told also of Dai Jin in other sources. Zhu Anxian does mention an unnamed provincial official who expected to get a painting from Zhang by virtue of the fact that the official’s status and authority were nominally superior to those of the painter. When Zhang refused to comply, the official angrily threatened him with legal action. Rather than being cowed, however, Zhang cheerfully waited for him to act since in fact—and this is the point of the story—the official could do nothing to him.

Zhu began his biography of Zhang Lu with the statement: “Master Zhang was a painting master from Daliang (Kaifeng).” The term “painting master,” huashi, is used in reference to Zhang Lu, Dai Jin, and several other major painters of the fifteenth and sixteenth centuries and may not have been a general descriptive term but rather a specific title, which at the time carried considerable weight and prestige. Later critics, especially those from the south, re-evaluated Zhang’s works and, on the basis of a changed aesthetic, denied his very real achievements. “Northerners viewed Zhang Lu’s paintings as precious as jade bi-discs while connoisseurs do not include them among the elegant pleasures. In recent days their reputation and value have gradually diminished.”