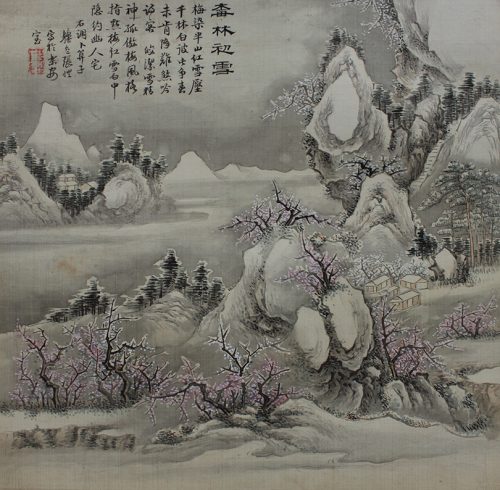 “Eight Views of the Silver Mountains” 1892

There were three artists named Chang K’ai active between the 17th and the 19th century. The last born served as a court painter during the 19th century, painting mainly in collaboration with other court masters in the creation of elaborate and highly decorative works. According to the Chung-kuo Mei-shu-chia Jen-ming Tz’u-tien, p. 859, Chang was born in Suchou, Kiangsu province, and served at court as a Palace Attendant in the Inner Household, Supervisor-in-chief of the Painting Academy, with grain allowance of the second degree. This account further gives his period of activity as during the Ch’ien-lung and Chia-ch’ing reign-eras (1736-1820) but this is not substantiated by other evidence. Apart from the present album, only two other paintings are known to be extant by Chang K’ai. Both are now in the collection of the National Palace Museum in Taiwan: “Assembled Immortals Wishing Longevity” (fig. 1) done together with Liang Te-jun and Chang Wei-ming, and “Pines and Cranes” (fig. 2) done together with Chang Wei-ming. In the inscriptions on these works, Chang K’ai’s signature appears first, suggesting that he was the lead artist in these projects, which accords with the knowledge that he was in fact in charge of the Painting Academy at that time.

Although clearly part of the Ch’ing imperial collection, neither of these works was recorded in the Shih-ch’u pao-chi san-pien of 1816, indicating that they had not become part of the imperial collection before that date and thus were painted later in the 19th century. The present album is dated to the year 1892, Chang’s latest known painting, done when he was clearly an accomplished master and still active at court; the colophons were all written by government officials, many giving their rank as Academician in Attendance. 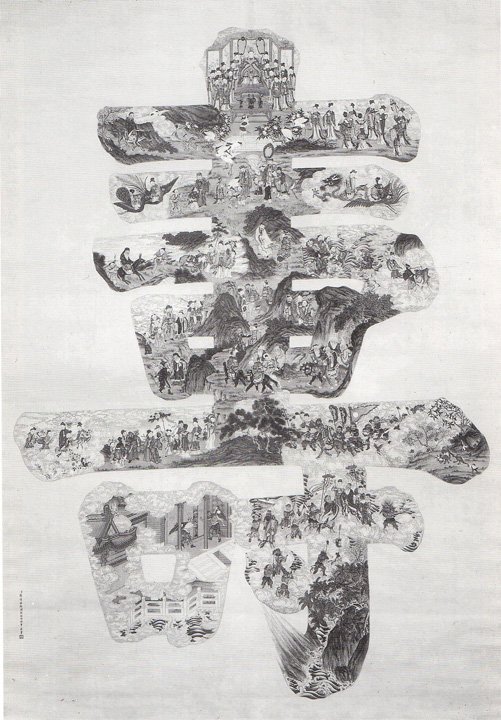 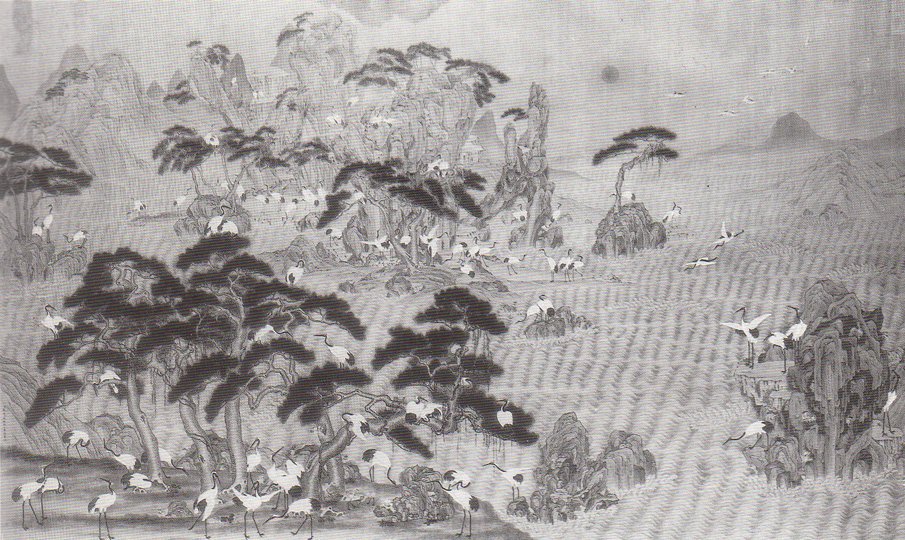 Leaf 1. “Early Snow on Plum-blossom Grove.
Plum blossoms color half the mountain in red,
snow restricts the grove of a thousand trees to white;
These all contend with spring, which is unwilling to descend,
a problem to worry the guests who intones poetry.

The unsullied moon captures the heart of the snow,
solitary and proud is the style of the blossoming plum;
Fingers applied the plum-blossom’s red amidst the white snow,
secretly in accord with the recluses hut.

Set to the tune of Pien Suan-tzu by… Chang K’ai at the House of Happiness and Peace.” 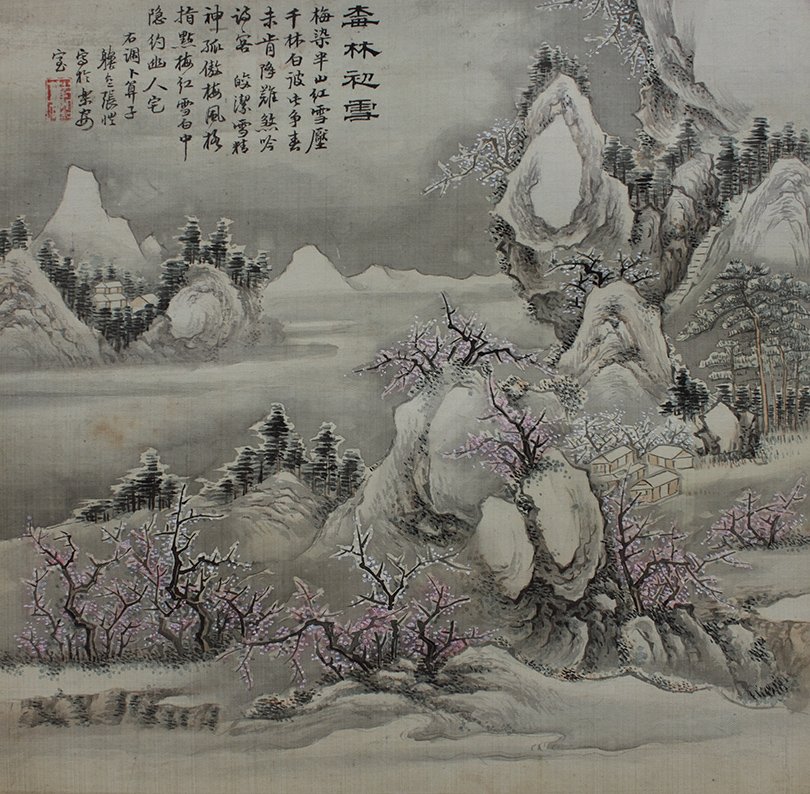 Leaf 2. “Auspicious Snow on River City.
At the edge of the world, in the midst of the heavens,
people’s happiness flourishes for years;
Several families on the water’s edge
enjoy the peaceful waves.
Walking and singing along the marches bank,
sauntering along to beside the bridge.
Facing towards the river clouds,
half the city is snow,
half the groves are mist.

Whose skiff is in front of the sandbank?
who is reclining in the empty mountains?
The guest who loves to travel is unaware of the cold,
when happiness arises he goes to visit Tai,
and when it subsides he pushes him far away.
This too is unconventional and ethereal,
and also untrammelled and free,
as well as self-possessed and quiet.

Set to the tune of Hsing Hsiang-tzu, inscribed at the House of Happiness.” 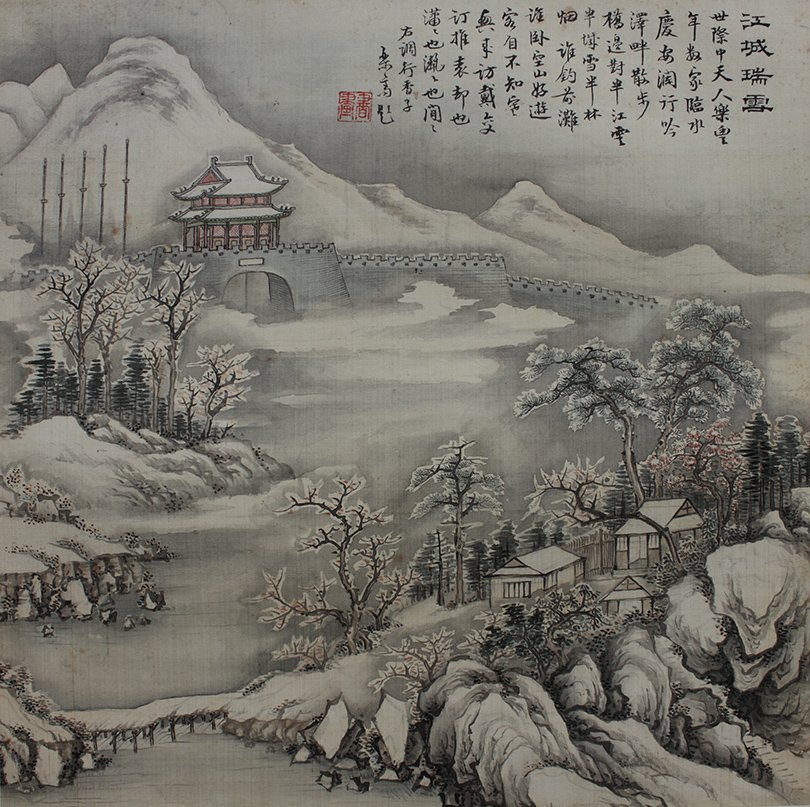 Leaf 3. “Sky Clearing over Mount Chung-nan.
The heavens suddenly clear
and blow to dispersal the icy clouds with a fine wind,
seeking to see Mount Chung-nan at the verge of the city,
quickly clearing the mountain scene is beautiful.

In convexities kingfisher-blue adds to the spiral coifurs
in concavities white pushes against the crane’s down;
In this place the young pines achieve authority,
their age difficult to record in hundreds or thousands of years.

Set to the tune of Ko Chin-men.” 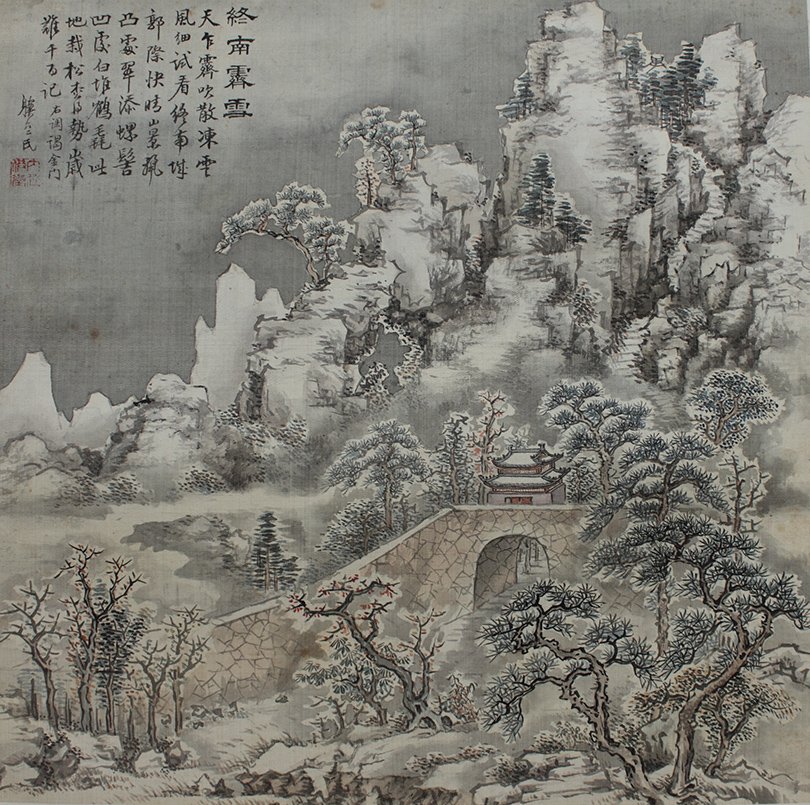 Leaf 4. “Snow in Pines on Mount T’ai-hang.
A myriad trunks of pines encircle Mount T’ao-hang,
icy clouds everywhere all around,
Sometimes the snow’s shadows flutter in the empty sky,
and the crane’s down flutters about.

In this region the sound of waves does not occur,
obliging like a road entering the blue-green pass;
High and low the mountain path avoids the spreading moss,
from dawn to dusk the heaven’s are cold.

Set to the tune of ‘Embodying Spring in the Painting Studio.’ Happiness Studio.” 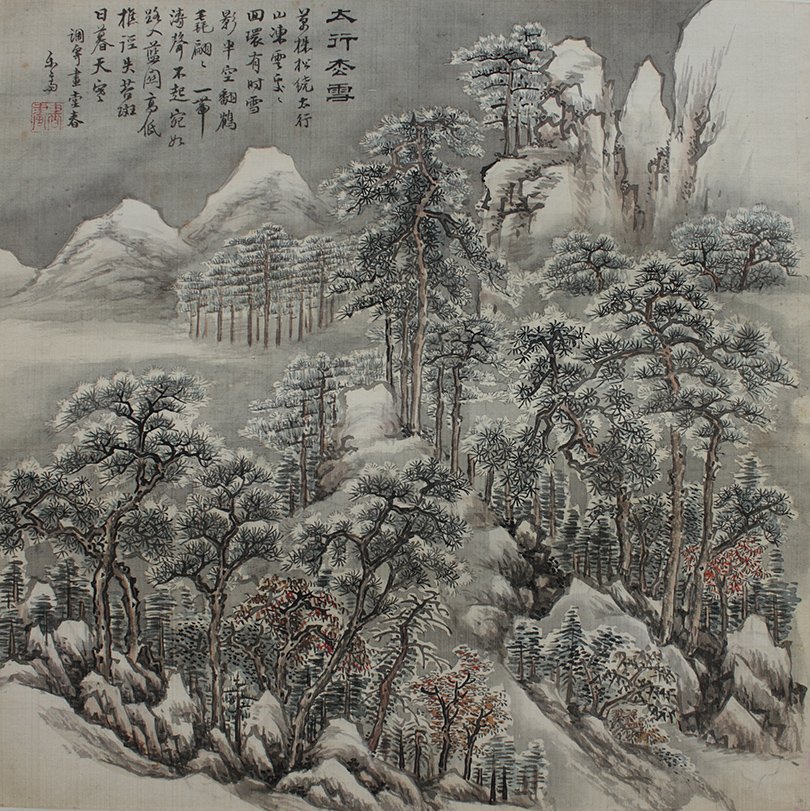 Leaf 5. “Rain and Snow on the Hsiang and Hsiang Rivers.
The whole night the wind blew,
uncertain it is how much snow fell on the flowers;
No one calls for the boy to sweep
And make good the whole of the mountain grove road.

Painting produces the Hsiao and Hsiang,
With king-fisher bamboo and green pines winding round,
Who built the storied building
Right now I lean against it,
And ask if the sound of the flowing water is good.

Set to the tune of ‘Dotting deep red on the lips.’
On the first day of the first decade during the year 1892 of the Kuang-hsu reign era, at the south window of the House of Peace and Happiness, painted by Chang K’ai.” 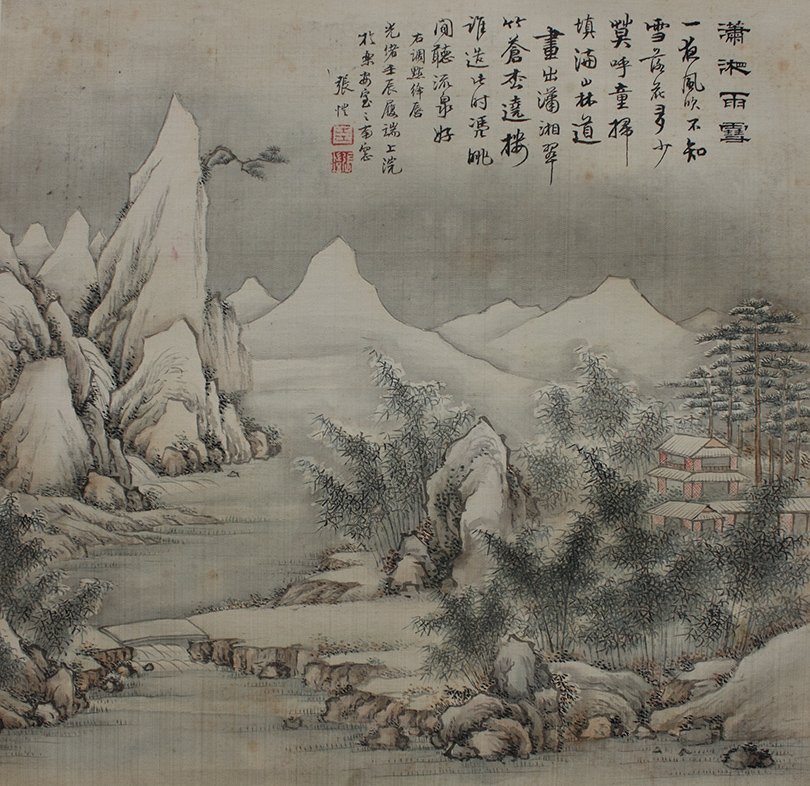 Leaf 6. ”Accumulating Snow on Mount E-mei.
Last night the moon was bright
within the mountains the snow piled on roads was level,
A monk returns to the rural temple,
in the rugged mountains an old road is entirely forgetful.

Listening to the temple bell the sound is loud,
white cloud winds blow leaves on the village before us,
At Shan Pass the road is closed,
and on the E-mei range there are few travellers.

Set to the tune of ‘Reduced character Mu-lan Flowers.’ Chung-k’an.” 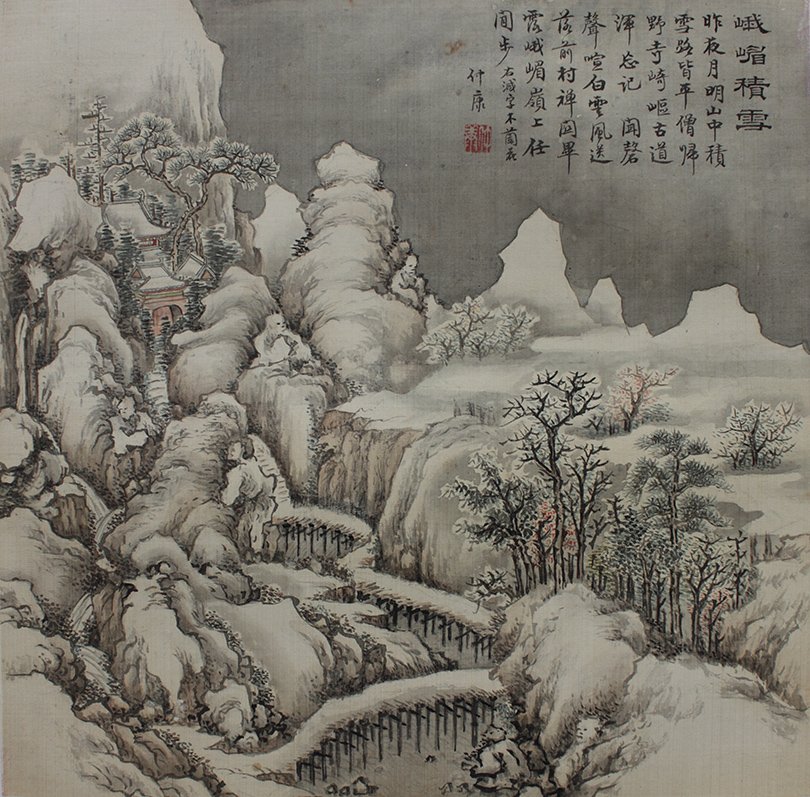 Leaf 7. ”Night Snow at Shan–yin.
With six turns the flowers fly, snow shadows bright,
several stalks of bamboo leaves lose their freshness,
arranging one night on the Shan-yin road,
filling in the highs and lows where the road is not even.

Poetry becomes painting
if brushwork is without cleverness,
who do I ask to hide my emotions at this time?
I wish I could sit alone within a grass-thatched hut,
Carrying wine with a loud song, watching the clearing sky.

Set to the tune of ‘Partridge Skies.’ The recluse …An.” 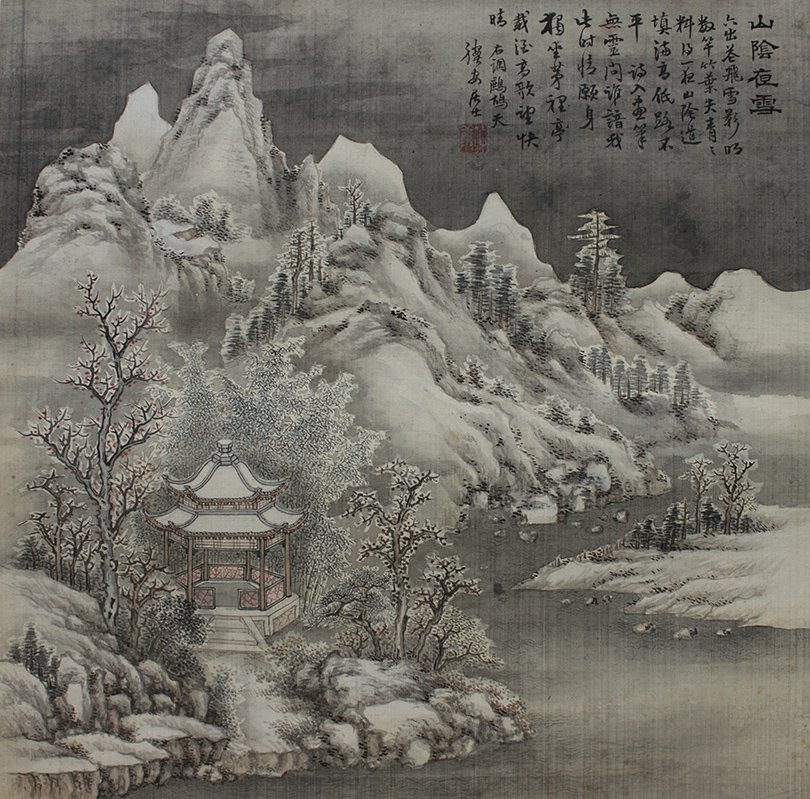 Leaf 8. ”Wind and Snow at the Pa River Bridge.
Urging our steps through the beauty,
the road follows the stream to the bridge,
the distant mountains set off the twigs of the old plum tree,
telling young boy to quell his nervousness,
and why not shoulder some peaches.

The wind compels the snow to float and whirl,
Emotions are aroused and poetry is heroic,
Singing perfects the beautiful scene which painting strives to describe,
Each character a pearl, the poem sings like jade,
For what reason do we weigh these things? 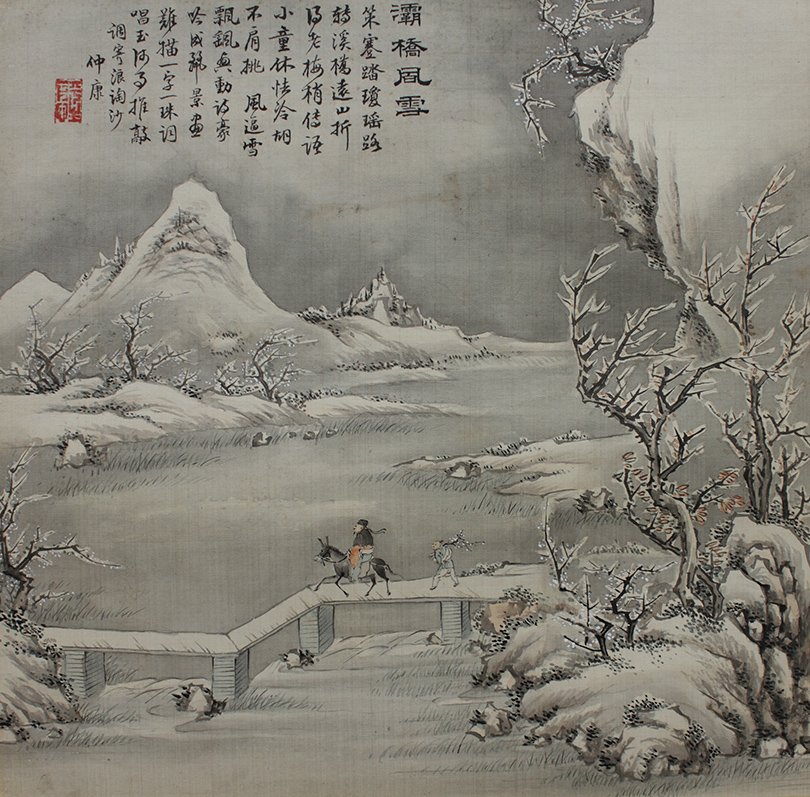