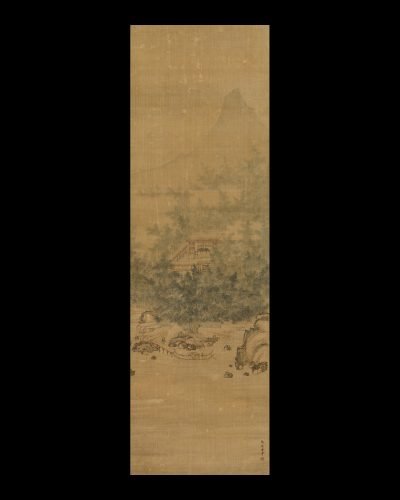 There were three artists named Zhang Kai active between the 17th and the 19th century. The last born, from Suzhou in Jiangsu province, served as a court painter during the early 19th century, painting mainly in collaboration with other court masters in the creation of elaborate and highly decorative works. The second youngest, active during the later 18th century and also the Wu district in Jiangsu, trained as a portraitist but was further acclaimed as a landscapist following the styles of earlier orthodox masters. The first-born artist, again from Suzhou and active during the 17th century, was almost certainly the master who painted the present picture.

Zhang Kai of the late Ming-early Qing era was a master in the evocative Songjiang style of painting evolved by Zhao Zou and Shi Shichong during the second and third decades of the 17th century. His period of activity is indicated by two dated paintings, one to 1627 in the Palace Museum, Beijing, and one to 1631. The last of these (fig. 1), painted for an album of landscapes done jointly with Shi Shichong, is done in a style very close to that of the present painting. On the other hand, the form of the signature and seal here suggest that Zhang created the work for submission to the court, which most likely would have been after 1644 and the change of dynasty from Ming to Qing. Zhang’s biography in the Tuhui baojian xuzuan, completed about 1680, was placed toward every end of the text and is short, suggesting that he was not then an “old” master.[1] 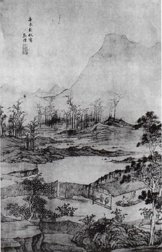