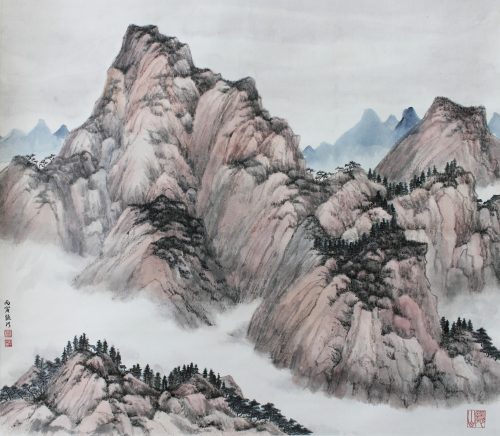 Inscription: “[Painted by] Zhang Hong in the bingyin year.”

Arnold was born in New York City, a descendent of a family native to Jiashan, Zhejiang province. He received a B.A. at the University of Colorado and an M.A. under Prof. James Cahill at the University of California, Berkeley. His teacher and mentor in painting was Wang Jiqian, better known in the West as C.C. Wang. Arnold established and headed the Chinese painting department at Sotheby’s in New York and subsequently worked for ten years at Kaikodo in New York, all the while engaged in producing his own painting. Kaikodo’s inaugural exhibition in February 1996 was a one-man show of Arnold’s painting, Backward Glances, and this was followed by inclusion of Arnold’s work in a number of subsequent Kaikodo exhibitions. While Arnold’s paintings are firmly anchored in the hallowed “Southern School” of Chinese painting, dominated by like-minded literati past and present, Arnold has an especially deep affinity for the 16th-century Suzhou masters of that school, as reflected in the present painting, a very early and conservative work in Arnold’s ever evolving oeuvre. But even here, a transformation of his sources is evident in the strong patterns formed, for example, by the blackened trees lining the summits, the tactile earth forms, and in the minuscule hints of human habitation, as if nature and art have prevailed over the mere existence of man. Arnold’s work is in the permanent collections of many museums including the British Museum, Asian Art Museum of San Francisco, Phoenix Art Museum, and Yale University Art Gallery.