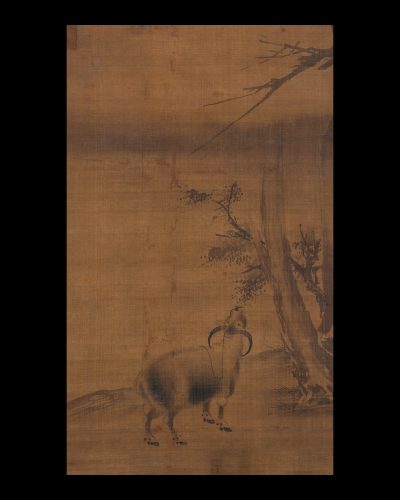 At first glance the painting might seem no more than a most pleasant reminder of the joys of a bucolic life—just the thing to please the eye and sooth the mind of some harassed urban bureaucrat or businessman—but in fact the subject also calls to mind the well-known Chan Buddhist use of an ox and its herd boy in a ten-fold parable to illustrate different degrees of understanding fundamental religious doctrine. Here the tether of the ox coils neatly across its back, well away from potential entanglement with the feet, and the creature is thus presented as entirely unconstrained, free to enjoy the full attractions of its environment. While the painting is not likely to have been part of a larger set, the association of the ox with the extended parable was such that even a single painting would have been sufficient to conjure the whole.

However attractive or profound the subject, though, the greatest pleasures here are those derived from consideration of the brush and ink work, at least if judged on the basis of Song rather than Yuan dynasty literati standards. Close parallels in style may be found with the paintings of Fachang Muqi (see entry above), whose works were appreciated and collected by the scholar-gentry class during his life-time. The abbreviated brushwork apparent in the trees of the present painting increases the visual impact the image, being perceived and understood directly and immediately, intuitively rather than through the intellect, but such an approach lacked art-historical precedent and was thus considered unsuitable for enjoyment by Yuan dynasty connoisseurs who prided themselves on their knowledge of early painting history and enjoyed the cerebral exercise of identifying specific sources for the stylistic characteristics of a given painting. On this basis it can be suggested that the present work dates to the 13th century, to the late Song or early Yuan dynasty, a time when critical standards were in flux and creative, idiosyncratic transformations of nature were still possible.

“Ox in Landscape” has long been attributed to Zhang Fangru, a Yuan dynasty artist known only through the appearance of his name in the Kundaikan Sayuchoki, the collection catalogue of the Ashikaga shoguns compiled in the early 16th century. One modern edition of that text states that Zhang Fangru was the same as the Jin dynasty official Zhang Gongzuo. Although that assertion cannot be substantiated at present, and no information on Zhang Gongzuo has been found, other 13th century artists such as Guo Min (ca.1180-ca.1270) are known to have served the Jin in the north until they were defeated by the Yuan in 1234, and Zhang Fangru too may have withdrawn at that time from the world of politics to reside in safe and principled obscurity within the realm of art.