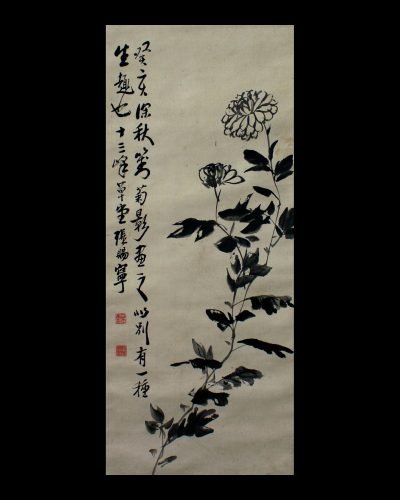 Inscription:
“During late autumn of the year 1803, I painted this facing the silhouette of chrysanthemums so as to achieve a different kind of life-likeness. Zhang Cining in the Grass Hut of Thirteen Peaks.”

A single stalk of chrysanthemums extends from lower left to upper right, providing formal contrast to the lines of calligraphy written to the left. The forms are flat, with little extension beyond the picture plane, which tends to emphasize the quality of the brush and ink work. According to the artist’s inscription, his work was based on the pattern formed by the shadows of the plant perhaps silhouetted against a wall. This technique, as well as relaying on the unevenness of a freshly plastered wall, for landscape painting, are known from the late Tang era, both of which were surely attempts to introduce a note of spontaneity and uniqueness to well-known subjects.

Zhang Cining (1743-1817 or later), called Guiyan, was born in Cangzhou, Hebei province. After entering government service, he was appointed Assistant Department Magistrate of Tongzhou in Jiangnan. Zhang began painting when young in a fine-line style, but, on meeting the artist Wang Chen (1720-1797; see catalogue no), Zhang began working in a more literati style, emphasizing brushwork over verisimilitude. Technically a very accomplished painter, working in a wide variety of genres, ranging from portraits to landscapes, bird-and-flower compositions to bamboo and chrysanthemums, Zhang established his own very distinctive style, akin to that of Yuanji (1642-1707), an independent artist of the previous generation to whom Zhang was compared, and to the eccentric Lo Ping (1733-1799) and, like both o his processors, Zhang lived in later years in the vibrant city of Yangzhou, his contributions being recorded in two major accounts of the city, the Yangzhou huafang lu, and the Yangzhou yuanhua lu, both of which mention his son and another pupil as distinguished followers of his approach to painting.