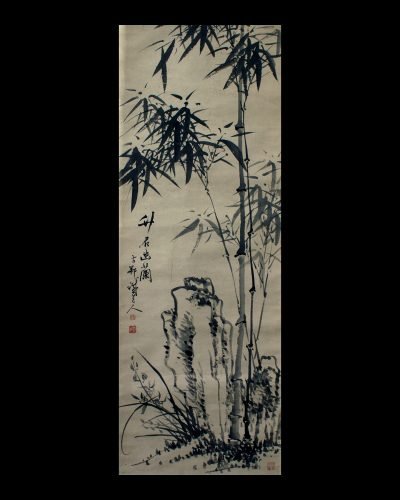 Stalks of bamboo rise beside a garden rock, at the base of which grow delicate orchids. The pictorial forms are few in number but manifest excellent technique and aesthetic vision. The garden rocks are substantial, their solidity created by overlapping planes of depth and judicious placement of texture stokes, all of which contribute to strong sense of verisimilitude in a composition that exists mainly in the frontal picture plane. The variety of strokes used to make manifest the rocks, the bamboo, and the orchids identify the artist as a master of his craft.

Yunke was born during the late 18th century into the Huang family in Wuchang, Hubei province. His birth and death dates are not recorded in standard sources but paintings are recorded for the years 1806 and 1814, and he is said to have died early in the Daoguang reign-era (1621-1850).

All of Yunke’s surviving works include his zi of Tiezhou (“Iron boat”) and hao of Mushi shanren, names presumably adopted after he became a monk and moved to live in Suzhou at the Liwang Temple. A true polymath, Yunko was a musician, a skilled calligrapher, and a painter known especially for his depictions of bamboo and rocks. Many of these latter works, including the present painting, evoke the style of the great Yangzhou master Zheng Xie (1693-1765) (fig. 1).