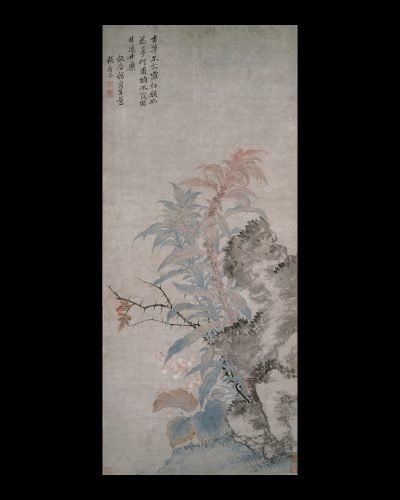 Inscription:
“There are grasses that know not frost,
red in color like flowering buds,
What need to pour out an immortal’s libation?
Why return to the medicines of cinnabar?
Pingxiangguan (Yun Shouping) painted this from life and for amusement added this poem. Shouping.”

At least four different flowering plants grow beside an upright garden rock, their blossoms and leaves offering pleasant contrasts in color, orientation, and shape, ranging from pink to blue, from horizontal to vertical, and from long and pointed to oval or needle-like. The rock exhibits similar characteristics and provides much pleasure when viewing the range of strokes, washes, and dottings. Based mainly on the horizontal and vertical axes of the picture, the composition harks back to the classic styles of the Northern Song and Yuan eras, eschewing the dynamic diagonals of the Southern Song and Ming masters.

According to the artist’s poem, the grass and flowers of the present painting all had efficacious properties and could be used to ward off ill-health and calamity, just as cinnabar elixers had been used in the past by Daoist practioners. Even the spikey plant possessed curative properties, identified as the Japanese apricot. And of course, the garden rock symbolized strength and longevity, the whole picture thus redounding in auspicious connotations and pictorial clues to meaning.

Yun Shouping was born in Wu-chin, Kiangsu province, the third and youngest son of Yun Jichu (1601-1678), one of the Chinese heroes who resisted the Manchu invasion in 1644-45. In 1648, during a Manchu attack against a loyalist stronghold, Shouping was captured and held at their headquarters. When the wife of the Manchu general desired some new jewelry, she had various craftsmen submit sketches, but none suited her, until Shouping was brought forward. A comely youth, and very intelligent, as well as talented in painting, the fifteen-year-old was adopted by the general and his wife. Through a ruse initiated by his birth father, Shouping was allowed to become a priest and eventually returned home, to follow his father in painting.

By the very late 1640s or early 1650s Yun had met Wang Hui (1632-1717), who became his lifelong friend. According to Yun’s great-grandson, “Yun Shouping became friends with Wang Hui of Yushan. Wang’s landscapes were very similar to those of Yun. Yun looked at them and said with a grin: ‘Two sages do not get on well with one another. You, my lord, will dominate all beneath the heavens with your landscapes; how can I too devote myself to the subject?’ and he then did flowers, plants, and drawings-from life.” While Yun continued to paint landscapes until the end of his life, he in fact became known primarily for his bird-and-flower paintings, such as the present fascinating example. It is in full keeping with Yun’s stated goals in painting: “Not falling into well-worn ruts is called having a scholarly air; not entering into the trends of the times is called having an untrammeled style.”