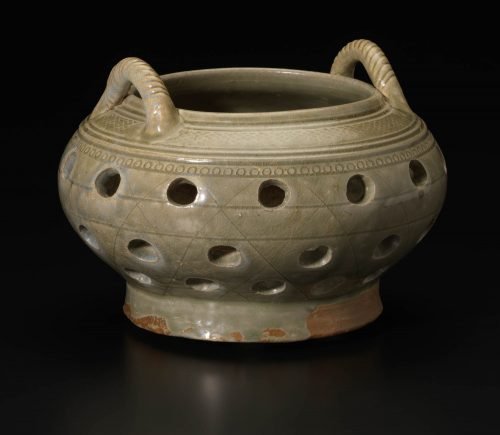 The censer is of flattened ovoid form raised on a flared foot surrounding a thick convex base. Three horizontal rows of circular holes are punched through the thick grey stoneware body with seven further circular perforations on the base, six arranged in a large circle around the central aperture. A pair of handles marked with deep grooves to suggest twisted rope is applied on the upper shoulder over a mesh pattern finely impressed between deeply grooved line borders. A band of circlets below completes the shoulder decoration. The body is lightly scored with a diamond pattern to highlight the apertures. On the exterior the greyish-green glaze is applied fairly thickly and somewhat irregularly, dripping unevenly onto the foot where areas of the bare stoneware body have burnt a reddish-orange color in the firing. The interior and base are fully glazed as are the interior walls of the apertures.

Incense burners were among the products of kilns producing early celadons in China and the forms were often patterned after bronze shapes. If there was any association, however, between the present type of perforated vessel and a bronze prototype, it is presently unknown to us. Although created by the late 2nd century, the form is found predominantly in 3rd century contexts and, by and large, in the south. A high-footed bowl excavated in Anhui province is pierced with numerous holes imprecisely placed and with a thin glaze that has almost entirely flaked off, perhaps indicating local production, whereas a piece, for example, excavated south of Hangzhou in Zhejiang province has carefully placed and articulated perforations and a stable glaze similar to the present and it is likely that both are products of the Yue region.1

A tomb excavated in 1991 in Hubei province yielded an incense-burning set consisting of a perforated covered bowl sitting snugly atop another vessel, an important find since it suggests that the holes perforating the bases of many of these examples were for the passage of fragrant smoke from a receptacle of burning incense below.2 Another excavated piece suggests an alternative to the presumed function of these perforated vessels, a piece excavated in Jiangxi province holding several smaller ceramic vessels within, consisting of four cups and two saucers, presumably a “dishwasher” used to purify the small vessels within.3 The incense-burning “set” and the “dishwasher” are the most intriguing members of a large family of perforated vessels of this early stage in celadon production in the south, examples of which have been discovered at sites in numerous provinces including Zhejiang, Anhui, Jiangxi, Jiangsu and Hubei.