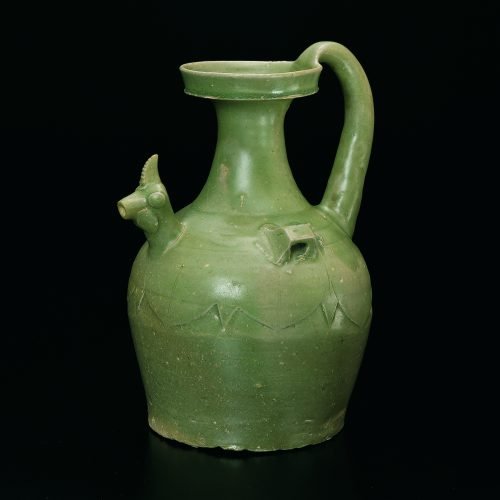 Heavily potted, the sturdy ewer rises from a slightly concave base, the sides ascending with a gentle bulge to the low rounded shoulder. The shoulder is incised with a double line and applied with two square lug handles between a chicken-head spout opposite a thick loop handle. The long incurved neck flares out to a shallow sharply articulated cup-shaped mouth. A band of wide lotus-petal motifs pointing downward is carved over the shoulder ending at the mid-section of the ewer. Visible between the petals are the tips of further petals indicating a “hidden” row behind. The cylindrical spout is formed into the image of a chicken head by the addition of an upright serrated comb, bulging button eyes, a wattle slapped on the side, and a small cylindrical beak which is the actual spout opening. An even greyish-green glaze covers the ewer down to the base around which the glaze is more haphazardly applied. The base is roughly finished, some areas burnt to a reddish color in firing, while a small chipped-out area reveals the light grey, dense stoneware body.

Despite the post-Han dynasty political instability in the south where six dynasties ruled between 222 and 589 from their capital at Nanjing, and despite the lack of dynastic longevity during this period, there seems to have been no ill-effects on ceramic production in the Yue region. On the contrary, a dynamic evolution transpired, one which can be understood and charted through the contents of dated tombs and ceramics with inscribed dates. The stylistic development of the so-called chicken-headed ewer is a telling example as one can easily observe the pudgy, globular or rotund products of the 3rd-4th century evolve into the taller, sleeker models of the 5th-6th century. Aside from iron brown spotting, the earlier versions of chicken-headed ewers are otherwise free of decoration; the later variety is sometime carved with lotus-petal bands upright around the bases or more commonly pendant around the shoulders, as in the present and related examples, the lotus design found on these wares likely a result of Buddhist influence.

For similar examples of chicken-head spouted celadon ewers with incised lotus-petal decor see the vessel excavated from a tomb dated to 461 in Ruian city, Zhejiang province in Zhejiang ji’nian ci, Beijing, 2000, pl. 142; another excavated in Huainingxian, Anhui province, in, Zhongguo chutu ciqi quanji, vol. 8: Anhui, Beijing, 2008, pl. 41; and another in The Cleveland Museum of Art, illustrated by Yutaka Mino and Katherine Tsiang in Ice and Green Clouds: Traditions of Chinese Celadon, Indianapolis, 1986, no. 30, p. 91.