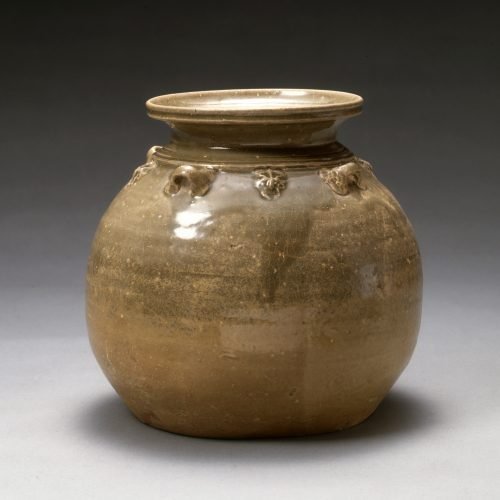 The husky shape of the jar is rather unusual in the world of early Yue ware with an earthbound stability established by its low-slung body and broad base while a sense of bulk and strength is imparted by its swelling sides. The glaze is olive in tone, irregularly applied, ranging from thinner to thicker depth, exhibiting a high sheen. The character of the glaze and a light grey stoneware body burning reddish-orange on the unglazed convex base are typical features of Yue produced on the early side of the Six Dynasties period. So too are the four loop handles alternating with small taotie-mask appliques on the shoulder. A sharp ridge below the constricted neck and finely formed lip rim enclosing the everted mouth cap the production with a modicum of refinement and precision.

The immense variety of shapes for funerary and profane use ranging in style from extreme simplicity to surprising complexity also characterizes this early phase of Yue production. Numerous kiln and tomb finds clearly establish the ware’s provenance, dating and dissemination. A jar that shares the distinctive form of the present, including the mouth rim, yet lacking the taotie-mask embellishment, is presently in a museum in Nanjing, a region where tombs of the Six Dynasties period abound (fig. 1). 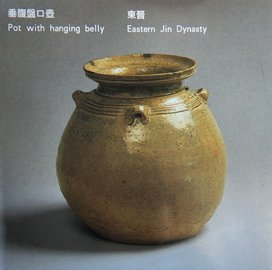