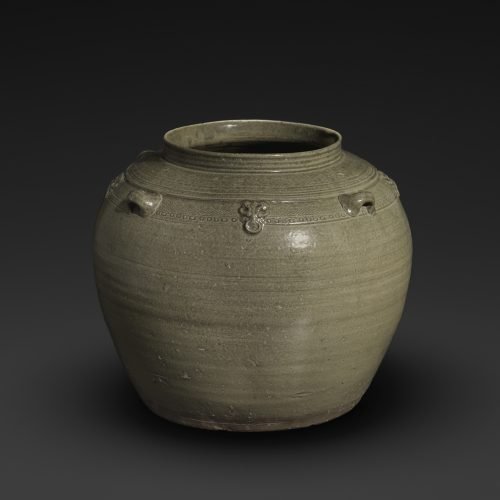 This hefty jar is of spherical shape resting on a wide, slightly concave base with a short upright mouth rim. The decoration is confined to the shoulder applied with four loop handles divided by small mold-pressed taotie motifs with mock ring handles over borders of impressed mesh and circlet bands beneath a stepped collar decorated with further impressed circlets. Covered overall with a thin, yellowish-green glaze, the base was left free of glaze where the light grey stoneware body burnt red in the firing. The glaze is typical of early Yue ware, exhibiting an earthiness by way of its impurities, such as iron spitouts on the surface, blemishes, and other irregularities.

The jar here is representative of one of the most consequential ceramic wares ever produced in China. The infancy of the celadon tradition was lived out in the Yue area of Zhejiang province. The technology to create stonewares– hard, durable impermeable ceramics—with glazes that both contributed to durability and aesthetic character, was the basis for the Yue success story. The seeds had been planted during the Bronze Age and germinated thereafter in a number of centers in the eastern central/south/southeast regions of China.

The jar, produced in the early part of the Six Dynasties period, shows some link to the Bronze Age past in its small taotie heads and geometric bands, but the shape depends only on the potter’s wheel. The present vessel was produced during that extraordinarily creative and productive period triggered by the influx of political, cultural and economic energy when the Han Chinese of the north fled the foreign invaders and established a government in Nanjing in Jiangsu province, a city that would serve as center for a succession of dynasties from the third through the sixth century. The Yue potters provided ritual, utilitarian and decorative wares at the time and continued for centuries to do so. The impact of the celadon revolution from this early period on later wares in the home province, on tangential provincial centers, on production northwards, and on neighboring countries in Asia and eventually the West, comprised a migration of technology and style truly momentous in time, in space and in scope.