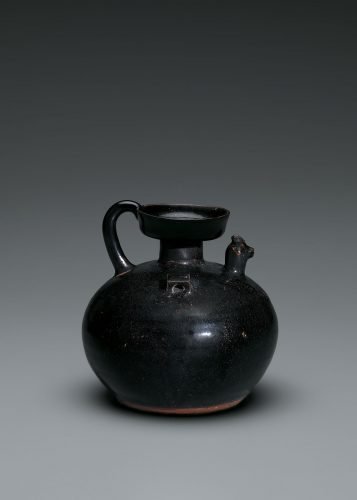 Formerly in a Japanese collection 所蔵:日本

The compact ewer is of compressed ovoid shape surmounted by a short cylindrical neck with wide cup-shaped mouth. A rounded loop handle is applied opposite the spout, which is in the form of a chicken head, its bold hand-crafted features including hooded eyes, a tall comb and ringed, cylindrical, opened beak. A perfectly formed square lug handle is applied on each of the two sides. The glaze has a somewhat dry, crystalline character, is a deep blackish-brown color, and was applied down to the unglazed concave base where the fine light-grey stoneware body has burnt reddish-brown in firing.

Chicken-headed ewers are among the numerous whimsical and inventive forms created by the adventuresome Yue potters of the Six Dynasties period. These particular vessels, like many others of their time, appear to have been inspired by Chinese Bronze Age art, in this case the bird-spouted pouring vessels of the late Zhou period. Those precedents, however, are so much earlier than the Six Dynasties period ceramics they appear to have inspired that it becomes necessary to consider how the influence might have come about. The migration of Han people from the north provided an economic boost centered in and radiating out from the new capital in Nanjing and greatly increased patronage for the Yue kilns not far away. Perhaps the bird-spout form related to late Zhou bronzes was an anachronism, drawing from the hallowed Confucian past and therefore of special appeal to this new clientele.

Dark (black and brown) glazes were an important innovation of the Yue kilns. Initially the dark glazes likely occurred accidentally and then intentionally when it was understood that an increased iron content, much greater than that required for various shades of celadon greens, produced a novel look. This occurred at least by the 4th century as evinced by material from dated tombs and kiln-site remains, the technique then migrating north and northwestward where dark-glazed wares became a staple in later ceramic production in those regions.