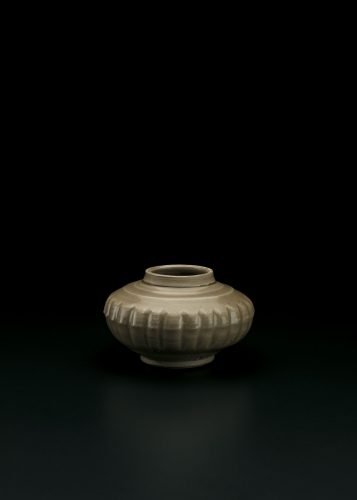 The mold-made jarlet is of compressed cushion form with multi-lobed sides rising to the stepped, sloping shoulder beneath the slightly angled neck and sharply cut flat lip rim. Supporting the jar is a low circular foot with a wide flat foot ring surrounding a recessed base. The thinly applied, light olive green glaze stops above the foot revealing the fine, smooth light grey stoneware body at the foot and base. The lobes peaking midway down the vessel’s body create a physical highlight marking its waist, which the glaze coating enhances. The glaze—transparent, smooth and with a bright sheen—drapes over the lip rim unevenly coating the inside of the neck while the interior of the vessel’s body is entirely glazed.

During the tenth century, historical circumstances pushed the Yue kilns in northern Zhejiang province into a crossroad and onto paths that would result in a variety of styles as they struggled to compete with the growing power and prestige of products coming from kilns to the southwest, that is, in the area of Longquan. One stylistic path, represented by the present vessel, evolved directly from Yue’s own previous achievement, the undecorated wares produced during the Tang (A.D. 618-907). Simple vessels of great beauty with thin, matte glazes, conveying a sense of understatement and free of affectation, these Tang period Yue wares were so admired that they were immortalized by poets and sought after by collectors ever since. A cache of Yue vessels discovered in the underground crypt of the 9th century Famen Temple pagoda in Xi’an, Shaanxi province, epitomized the quiet aesthetic of the so-called mise, “secret color,” vessels of the Tang dynasty.1 Although the present vessel issues from that subdued style, its bright glaze and dynamic shape have resulted in a se par at e and ne w aesthetic statement.

A small jar of Tang manufacture provides precedent for its rather unusual form (fig. 1).2 The vessel was excavated at Shangyu, an area of Yue kilns (between the great kiln complex at Shanglinhu and Shaoxing) that Mary Tregear had suggested as a likely source for high quality Yue wares of the tenth century.3 However, a multi-lobed jarlet like the present, with the addition of small handles at the mouth, is attributed to the 10th century Yuyao kilns in the Shanglinhu area, based on a similar ceramic excavated there now in the Hangzhou Museum (fig. 2).4 The Shanglinhu area was an important producer of Yue wares, the various kilns in the region providing wares for various markets, for the Tang nobility, for the court of the Wuyue Kingdom of the Five Dynasties period, and for the early Northern Song court as well. The wares were further distributed to more widespread markets at home and abroad where Yue ware continued to be in demand. 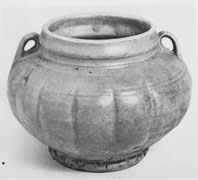