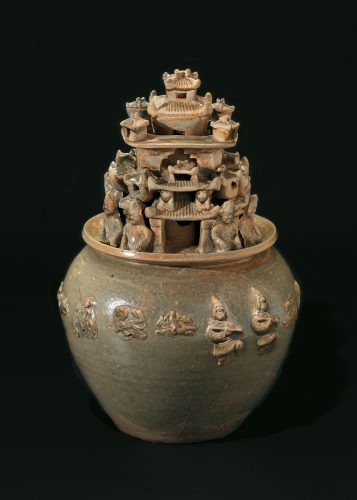 The bulbous vessel rises from a slightly concave base, swelling to full shoulders and culminating in a wide mouth whose rim supports a multistoried architectural complex, square in cross-section, pyramidal in form and accessible on all four sides. Each of the four ground-level entryways has a triple-tiered tiled roof with curved corner eaves, the lower roof of each supported by a pair of pillars, an oversized guard stationed next to each pillar, while the roof directly above is hoisted on a pair of rudimentarily modeled animals and the smaller roof above that again supported by pillars, with pagoda-like structures flanking the gates. The upper stories are accessible through a massive gated wall, the gates on each of the four sides with distinctively stepped jambs and the wall on each side surmounted by a long roof with a small lookout tower strategically placed at each corner and a similar tower surmounting the sweeping tiled roof which forms the apex of the construct. The body of the vessel is applied with a stream of intricately detailed, mold-pressed figures and includes leaping chimera, riders astride other fantastic creatures, and armoured warriors wearing peaked helmets, grasping long sticks or pikes, and posed to strike. The frenzy of the animated procession is stabilized by the alignment of the appliqués in a single horizontal corridor with a pair of horned taotie masks with mock ring handles distributed among them. The dense grey stoneware body is fairly evenly covered with a relatively thick glaze of greyish-green hue, exhibiting a modicum of crazing and a bright surface. The base is slightly bowed and unglazed.

The rapid rise in productivity, creativity and prosperity of Zhejiang’s Yue kilns after the fall of the Han (206 B.C.-A.D. 220) is a well- known phenomenon. The flow of political and cultural energy southward provided stimulation and encouragement and the potters who had developed distinctive stonewares with celadon glazes were able to capture the market for both daily-life necessities and the ceramic products required for equipping tombs. The local market swelled with newly arrived immigrants from the north whose homeland had been seized by non-Chinese invaders who would hold sway there for some centuries hence, and these new arrivals in the south increased the clientele of the Yue kilns.

Although the stonewares produced there did not completely replace precedent earthenwares, they were on track to do so. The stoneware potters closely imitated Han-style mingqi during the early post-Han period, or tailored the adopted forms to suit the high-fired ceramic medium, and who could resist using these upscale items as they became available for daily use. While new forms came into being and became part of funerary accoutrement, there is almost invariably a source to which these creations can be traced. This is true to some degree also with the urns in question. For example, among possible prototypes are the late Han ceramics with small storage jars in groups of four around a central vessel all mounted and fired in place above the mouth rims of the urns, sometimes with figures lounging nearby or with birds flocking around the small jars suggesting they are brimming with seed. The architectural features, although reflecting actual southern Chinese architectural styles that are reproduced in ceramic mingqi of the Han and early Six Dynasties period (A.D. 222-589), become, however, the central motif of these extraordinary constructs. Creatures real and sublime represented in the ceramic arts of the Han and early Six Dynasties period— chimera, rams, warriors, hunters, guardians (small, relief versions of the monumental figure in cat. 45)—are gathered onto what began as the simplest and most straightforward of vessel forms and, along with the extraordinary architectural super structure, turn this type of vessel into something unique. Although these constructs have a place in a genealogy of Chinese ceramic funerary urns, there is, in truth, nothing quite like them before or after. These dramatically decorated ceramic structures came upon the scene in a flash and left the same way.

Datable tomb finds and pieces dated by inscription indicate a general time of production between the Wu (A.D. 222-280) and Western Jin (A.D. 265-316). The pieces range from the bombastic and chaotic to the restrained and from the absurd to the sublime—a urinating figure on one, images of the Buddha on others. Among extant examples, the present is notable for its orderliness and sobriety, for its relative simplicity, for its clarity and restraint. A number of examples close in style to the present include one from a Western Jin period tomb in Shaoxing in Zhejiang province (fig. 1), and two from datable contexts: one from a tomb discovered south of Hangzhou in Zhejiang province datable to A.D. 300 (fig. 2) and the other also from a tomb in Shaoxing, east of Hangzhou, datable to A.D. 313 (fig. 3), which is among the latest datable examples of this type of urn. These latter firmly datable vessels suggest a date late in the sequence also for the present piece.

An interesting feature of the present urn is the stepped-pyramid shape of the gates, also see on a hunping in the Ataka collection in Japan (fig. 4). This configuration is rarely seen in the decor of hunping but is a common form in such other products as Yue ware incense burners commonly found in tombs of the early Six Dynasties period (fig. 5).

Tombs including the hunping under discussion here are restricted to Zhejiang and Jiangsu provinces and are believed to represent local beliefs and funerary customs. According to Sabrina Rostelli discussing a hunping with small images of the Buddha in its decorative program (as well as other figures casually draping themselves over the vessel’s rim) (fig. 6), ‘It would therefore seem that the local funeral rites incorporated Buddhist elements. From literary sources it can be inferred that the Wu kingdom (222-280) already hosted some Buddhist communities and the exegetic texts manifest a certain openness towards the influence of the indigenous religious beliefs; thus, the urns represent an innovative example of interaction between Buddhism and the traditional Chinese culture ….The sudden disappearance of the spirit urns from the funeral outfit at the beginning the fourth century has been attributed to the changes in funeral rites imposed by the northern aristocracy migrating to the south.'[1]

Whether meant to house the soul of the departed who could not be accorded a proper burial or to serve the dual function of granary below and mansion above, or whether representing a Daoist paradise long held to exist in Chinese belief or the Buddhist Western Paradise, a newer concept in China at that time, and whatever the reason for their appearance and disappearance from the Yue repertoire, these funerary jars have given scholars much food for thought, becoming a magnificent obsession to match that harboured by the ancient Chinese with the afterlife.[2] 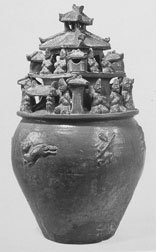 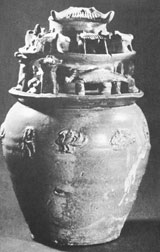 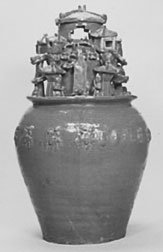 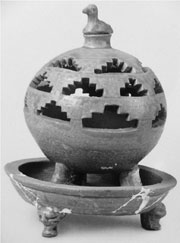 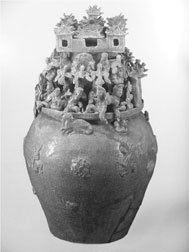