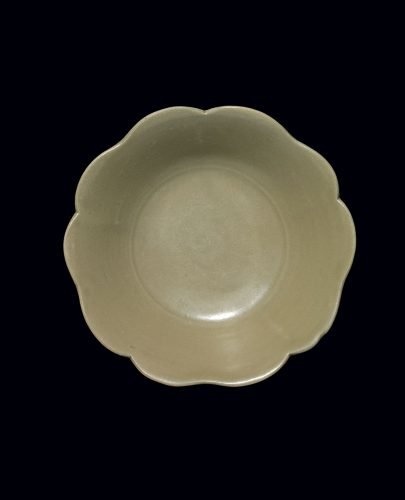 Of shallow form, the gently flared sides of this light-grey stoneware dish rise to an undulating rim of pentafoil shape. The five subtle ribs radiating from an incised circle around the well on the interior were formed when five grooves were deeply carved on the exterior. The pale olive-colored glaze forms a thin, even coating with a surface that is smooth in texture and matt in finish. The glaze covers the entire dish including the concave base where “spur marks” indicate where eight small pads of clay were arranged along the periphery to raise the dish during firing.

Two important phenomena came into play during the Tang dynasty that contributed to the popularity and success of Yue ware production and the genesis of the present form, a type excavated in China and preserved in collections there (figs.1-2) and also held in private and public collections outside of China (fig. 3). In the first place,the art of the ceramicist had advanced in status to the point where ceramics could be appreciated for their own sake in the here and now, whether they be utilitarian or of predominantly decorative importance. Tea drinking, which had become an important past time, contributed to this phenomenon. The jade-like appearance of the celadons, along with the ability of the potters to produce functional and appropriate vessels, catapulted Yue ware to an elevated status within the world of tea. In the late 8th century, Yue bowls were deemed the sine qua non for tea-drinkers by the Chinese master of tea Lu Yu (A.D. 733-804) in his Chajing, the “Classic of Tea.” Secondly, the silver wares that were lusted after in Tang China (a preferred material for utensils and vessels for use in secular drinking, dining, decoration and personal ornament, as well as for religious observances) were emulated in ceramics. Lobed and foliate forms, as illustrated here in a silver cupstand of the Tang period excavated at Dantuxian in Jiangsu province (fig. 4), were part of the charm of silverware and were easily adopted by potters resulting in ceramic shapes suggesting undulating petals and supple blossoms, such as the five-petaled mallow form of the present dish. Further, whereas silver dishes were normally fashioned with feet, the Yue versions here each has a simple concave base. Silver decor had an equally profound impact on Yue ware but in the present type of undecorated dish, shape and glaze were the primary aesthetic features. Potters in the north were on the same page as their compatriots further south, producing elegant white wares in silver forms similar to those of the Yue potters (fig. 5).

By the later 9th century the poet Lu Guimeng wrote of the glories of the Yue kilns and the “secret color porcelains” created there. Less than a decade before his death in A.D. 881, the Famen Temple pagoda treasury in Shaanxi was sealed.Over a millennium passed before its discovery in recent times. Along with the extraordinary silver and gold utensils for the preparation of tea, fourteen Yue ceramics believed to have been made within several decades prior to the closing of the underground storehouse were found. The undecorated Yue wares, with their pure and graceful forms and their lovely glazes, reflected the new fashion among the elite for simplicity, purity and grace (fig. 6). Tombs datable to the tenth century, spanning the late Tang, Five Dynasties and early Northern Song period in north and south alike bear witness to the triumph of this fashion, a fashion well represented by the present dish. 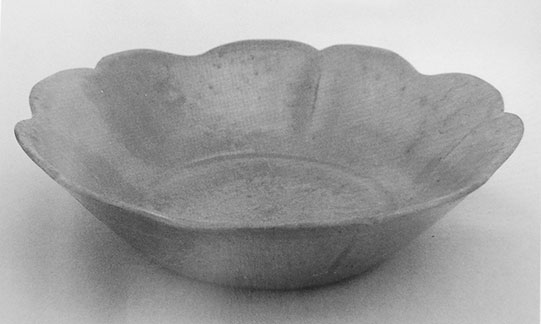 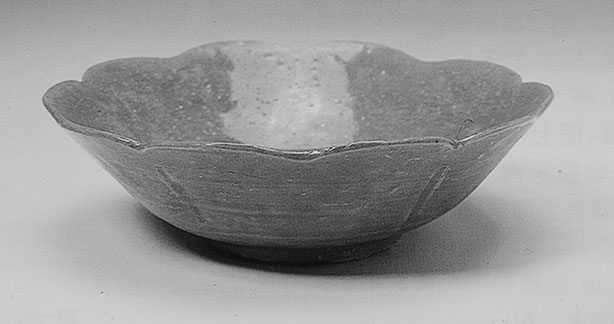 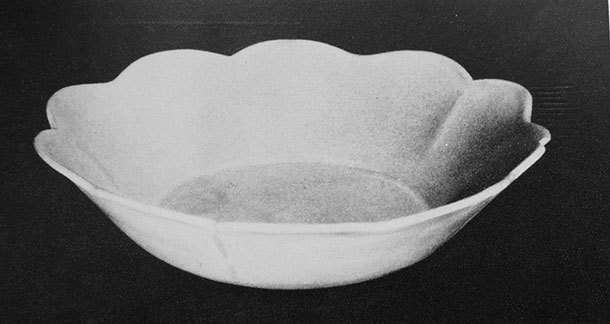 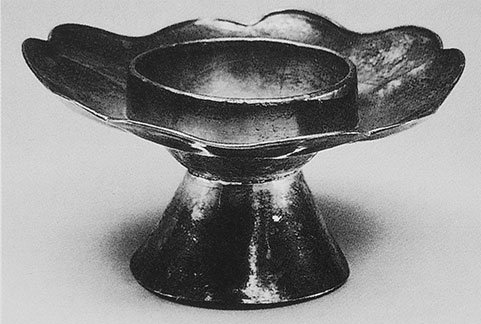 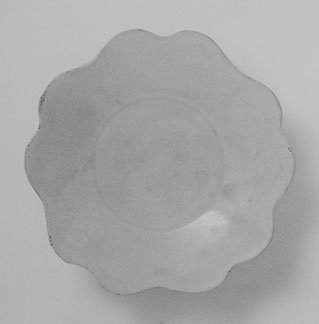 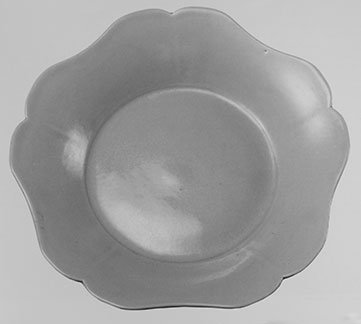