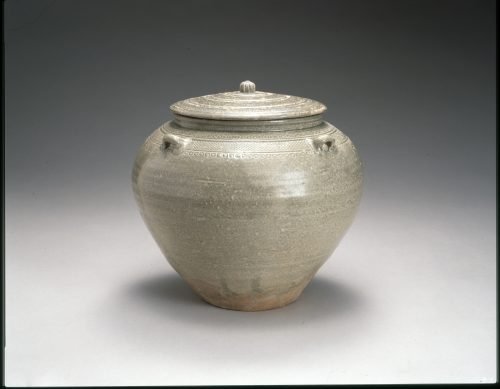 The handsome jar has a high rounded shoulder and full bulbous body tapering down dramatically to a concave unglazed base. Four small loop handles formed from rounded cords of clay are pressed horizontally onto the shoulder over a finely impressed mesh ground bordered by deep grooves and rows of tiny stamped florets. The decoration on the cover is similarly based on impressed floret and diaper patterns, organized there in numerous concentric bands separated by deep grooves with a small cushion-shaped knop in the center. The jar and lid are covered with a thin, irregular, somewhat glossy olive-green glaze exhibiting the imperfections typical of the period, the glaze stopping above the base where the grey stoneware body has burnt a light rusty color in the firing.

This jar represents a standard type within the large and diverse repertoire of Yue ware during the post Han period but few appear to have survived with their covers intact, two of them illustrated here (figs. 1-2). Pure ceramic form asserts itself whereas traces of bronze art remain in the shoulder and neckband decoration, and a nod to Buddhist imagery, in the present piece, in the knop on the lid, which we described as a “cushion-shape,” but is in the form of an amalaka, an architectural accoutrement from India. By the fifth century or so, the old-style patterns that linked the ceramic wares to the past would be replaced by such updated decorative conventions as lotus petals from the Buddhist world, as potters adapted to their products formulas originally developed in sculpture.

For anyone who has followed Kaikodo Journal for the last two decades, and the recent online editions, our affinity for early Yue ware might have been noticed, and we’ve dealt as many hands as we were able for understanding our take on this early ceramic achievement of Chinese potters. The evolution of stonewares at the Yue kilns in northern Zhejiang province was nothing less than phenomenal. Forms and decoration to suit multiple functions and markets were extraordinarily numerous and diverse. An archaeological record of these ceramics based on finds at home and abroad continues to prompt interest in and refine our understanding of Yue ware, which was the cornerstone of the long celadon tradition in China and the inspiration for the birth and development of parallel traditions abroad. 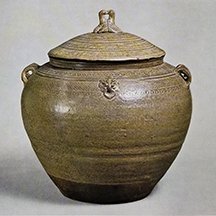 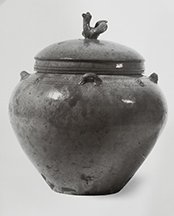