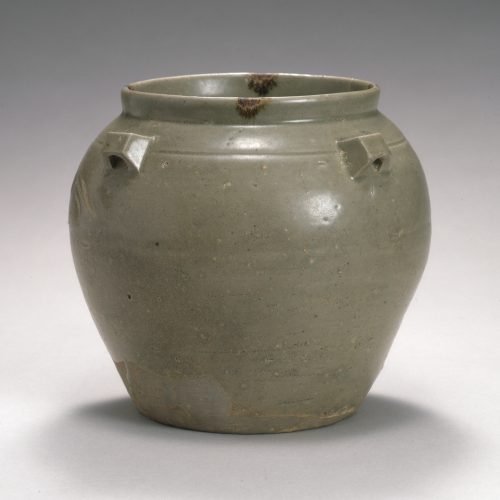 The gently curved sides of the sturdy light-grey colored stoneware jar rise from a slightly convex wide base to an equally wide mouth with short, straight upright rim, the shoulder sporting four sharply-cut square lugs equidistant from one another across a horizontal groove, and between them four ferruginous spots highlighting the mouth, a very thin olive-green glaze with some surface blemishes applied overall to the interior and on the exterior stopping short of the base in irregular swags, the base oxidized to a reddish-color in some areas whereas others have burned a buff color.

Here is a complete and perfect collection of the salient features of the ceramics produced at kilns located in southern Zhejiang province’s Yue region during the early Six Dynasties period from the 3rd into the 5th century. The wares produced there encompassed a plethora of shapes ranging from those linked in form or decorative detail to products of the Bronze Age as it wound down into the Han, to highly complex and imaginative creations, to simpler, streamlined and straightforward shapes, as exemplified by the present jar. The foundations of the celadon tradition were well laid at this point.

The present jar is characterized by a rather sophisticated, regular, symmetrical, clean form which suggests that it was produced towards the later end of this early phase of Yue production, likely during the late Eastern Jin period.