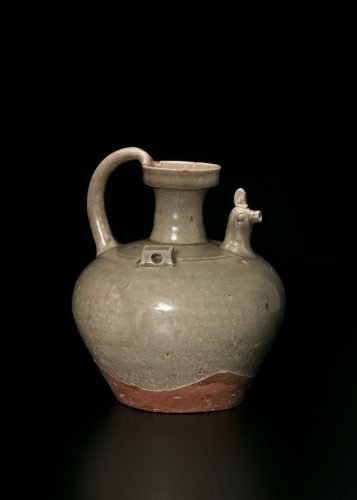 Of medium size, the ovoid vessel is well potted with a full expansive body, rounded shoulders, a high cylindrical neck terminating in an incurved cup-shaped mouth, and resting on a wide concave base. A single intaglio line circling high on the shoulder served as a guide for the placement of a pair of sharply cut rectangular lug handles and spout in the form of a chicken head midway between them. Opposite the spout a handle loops from the shoulder to the lip rim. The relatively tall spout sits upright on the shoulder, its bold hand-crafted features include hooded eyes, a tall comb and ringed cylindrical opened beak. Before firing, the ewer was dipped into the glaze in a manner that formed sweeping curves well above the base. The thin greyish green glaze is crazed throughout and is typically irregular in color and marked with iron spit-outs. The ewer is subtly enhanced by some carefully placed iron-brown spots on the mouth rim and spout. The fine-grained, compact light greyish body has burnt a rich reddish color visible on the unglazed lower portion of the body and on the base where six patches indicate the placement of the pads used to raise the piece off the kiln floor during firing.

The Yue kilns in northern Zhejiang province, flourishing for around a millennium, from the Han right into the Song, provided stonewares for generation upon generation of Chinese. During the period of the Six Dynasties (A.D. 222-589), they would have had an immense variety to select from, for daily use, for ritual, and for entombment with their deceased. These centuries saw a fragmented, war-torn land, with the north reforming itself under foreign conquerors, the Buddhist religion filling and in fating whatever spiritual vacuum would welcome its graces, the realm of Daoist practitioners and believers bursting with creative juices—real and imagined, and in literature and the arts creative minds unstoppable in their races to create something new, relevant, viable. Among ceramic producers, the Yue potters were at the fore.

There were in fact many creations emerging from the Yue kilns at this time that could easily be called the “most intriguing,” “most innovative,” or “most surprising,” and the chicken-headed ewer might be numbered among them. It is surprising not only that a handsome but unassuming ceramic form—essentially a jar—should be fitted with a spout in the form of a chicken’s head but also that such a peculiar construct would become as popular as it did. Numerous examples have been excavated from datable tombs, a good number in the area of Nanjing, the capital of each of the southern dynasties in power during this period. Two are illustrated here. One is from the tomb of a Mr. Wang Ming who died and was buried in Nanjing in A.D. 358 during the Eastern Jin dynasty (A.D. 317-420) (fig. 1) and another also from a tomb in the Nanjing vicinity and datable on the basis of bricks with impressed marks to A .D. 379 (fig. 2). It should be noted that both are close in proportion and detail to the present ewer and that the ewer in figure 2—with a most uncharacteristic feature, a lid—is also decorated with small iron- brown spots. Three chicken-headed ewers of this type were excavated from a tomb datable to A.D. 421 at the beginning of the Liu Song dynasty (A.D. 420-479) and also in the vicinity of Nanjing—a tomb especially significant due to the content and calligraphic styles of the lengthy tomb inscription. Two of the ewers (figs. 3-4) are interestingly fitted with dragon-head handles that not only point to future Yue ware styles but also spark interest in the origin of the early Six Dynasty period chicken- headed ewer forms

A number of Yue-ware pots and jars from the Western Jin era (A.D. 265-316), predating the vessels under discussion, incorporate small chicken heads into what were becoming standard decorative themes and sequences (fig. 5). Here the chicken head is among appliqué images including phoenix and a small seated Buddha. It must not have been a great stretch of the imagination to fashion such jars into ewers in which the chicken head with open mouth could easily serve as a spout. However, in the ewers that were soon to emerge during the Eastern Jin dynasty there is invariably no additional decoration, not even a band of impressed diaper around the shoulders, which was such a common, subtle but attractive embellishment of Yue wares of this period. Another Western Jin vessel predating the full- fledged chicken-headed ewers is most intriguing since its complex form and accoutrements suggest derivation from a bronze vessel (figs. 6-7). However, the bronzes that would serve as prototypes were made centuries earlier. We might wonder then if the Yue ewer embellished with what appear to be antique bronze-art features suggests a conscious turn to the past, a past that had been left far behind not only temporally but physically as well with the fall of the Han dynasty in the north and the flight of Han people to the south. While the scholars were looking to Confucius and Laozi for guidance, why not potters being led to those same ancient eras and sources of inspiration relevant to their own realm of creation? If that is the case, did that antiquarian interest result ultimately in what were the very up- to-date and fashionable chicken-headed ewers of the Six Dynasties period? 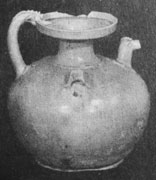 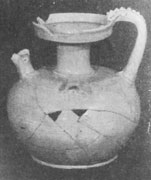 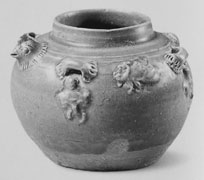 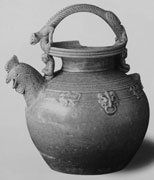 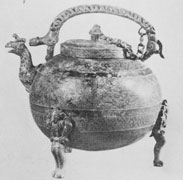