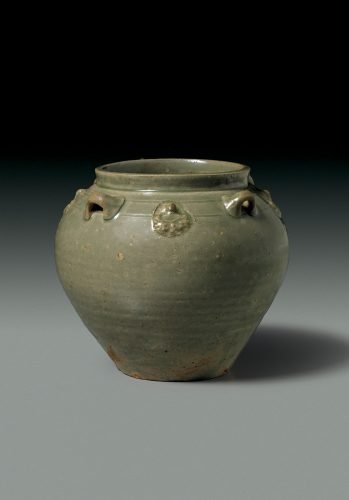 The sturdily potted ovoid jar rests on a concave base. The wide shoulders are incised with double horizontal lines and applied with four evenly spaced loop handles interspersed with molded images of the Buddha below an upright square-cut rim. The greenish-gray glaze falls in glossy sheets over the finger-grooved body. Five spur marks encircle a sixth on the unglazed base where the light-grey stoneware has burnt reddish brown. A circular patch is left unglazed on the inside of the jar.

The Yue region of northern Zhejiang province was a fertile ground for ceramic production for around a millennium, from the mid Han to the Northern Song period. The technological lynchpin was the ability to fire hard, durable, impermeable ceramics, known as stonewares. The utility, durability and aesthetic character of the ware depended in large part on the high-fired glaze coatings that were kaleidoscopic within the spectrum produced by iron oxide, though limited at any stage by the technological capabilities under control at that time. Hence was born a wide range of celadons and black- and brown-glazed wares.

Forms were developed to serve a vast range of purposes and decoration was created to suit existing tastes and prompt new ones. Aside from their technical superiority at the outset, in comparison to any other ceramic being produced at the time, the Yue potters lived and worked according to an open door policy that allowed for unlimited possibilities. Ideas streaming in from near and far could be adopted and utilized by the potters while the styles and techniques they created and developed flowed outward resulting in emulations and imitations of their wares.

One design element to have arrived from distant lands had to do with a religion, Buddhism. Buddhist forms and features entered the consciousness of ceramic decorators during the Han dynasty when artists and craftsman had not yet completely outgrown their Bronze Age foundations. It is thus that the small images of the seated Buddha, pressed out of molds, were applied to the surfaces of ceramic vessels directly over impressed or stamped decoration that had grown out of the secondary border motifs on bronze vessels, replacing the usual taotie monster mask appliqués most frequently seen on such vessels (figs. 1-2). A basin illustrated here is decorated with the Buddha images only, the band on the shoulder dispensed with and therefore exhibiting, as does the present jar, independence from thebronze predecessors (fig. 3).

Small images of the seated Buddha were also incorporated into the design of vessels called hunping (“soul urns”) in the West that were made according to the ceramicists’ own lights, freed completely from dependence on anything aside from the necessity to produce a vessel that would be an appropriate home for souls that had departed from the bodies of the deceased,if that was indeed their function (figs. 4-5). The Buddha found himself in the idiosyncratic world of the Chinese on these hunping, where chimera romped, taotie masks stood watch, palatial buildings reached for the sky, and where rows of human figures—elders? Mystics? Daoist priests? family and friends of the departed? attendants and guardians—gathered. Roughly contemporary with the hunping, images of the Buddha were also incorporated into the designs of bronze mirrors, in the example here dominating the iconography (figs. 6-7). Just prior to the Yue ware hunping and present jar and related pieces where the Buddha was enshrined, images of the seated Buddha were sometimes cast on the trunks of bronze Money Trees (see cat. no. 45). In these examples, the noble spirit from India has been transported into the Chinese world of immortals, where Xiwangmu, the Queen Mother of the West, reigned and dispensed wealth, longevity and even immortality to her subjects (figs. 8-9). The association of divinities from separate and distinct pantheons is a clear expression of the ability of the Chinese to mix and match in their spiritual lives.

Although the advantages of “covering all the bases” is understandable in the Money Trees and hunping, which were funerary accoutrement that would accompany and serve the departed in the hereafter, how would a miniature Buddhist image decorating a vessel that might be designed for domestic use be regarded? It is not unreasonable to assume that such images were taken up by artisans simply as decorative motifs and incorporated into their standard lexicon. However, if given a second thought by consumers at that time, when Buddhism was not yet a household word, the small haloed image might have been regarded as just another magical or mystical being, an immortal from the familiar Daoist firmament. 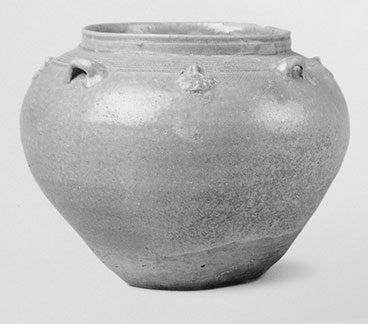 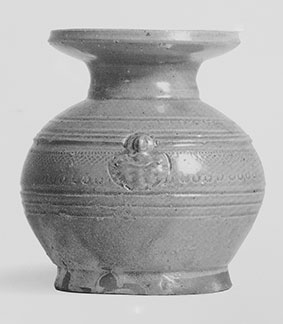 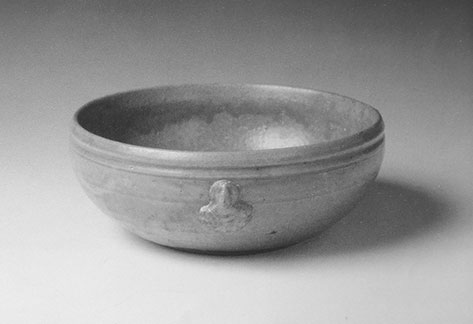 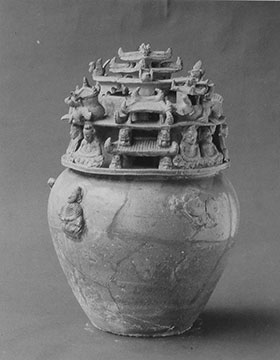 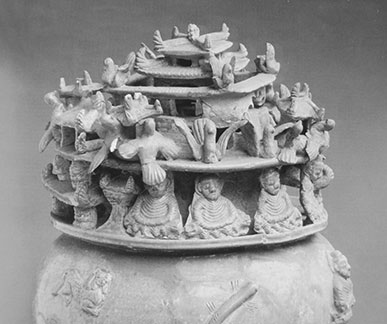 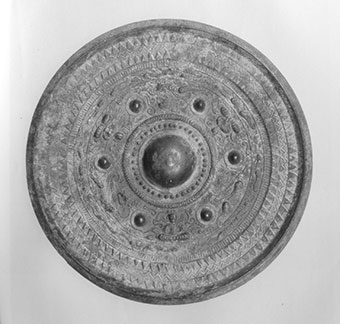 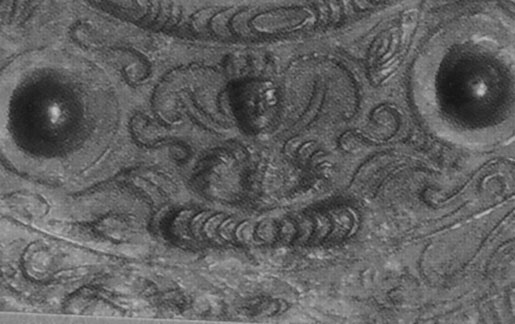 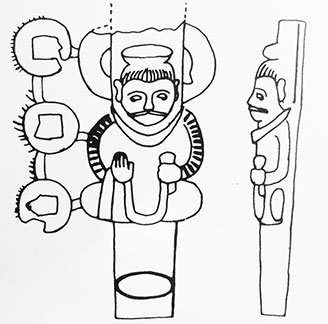