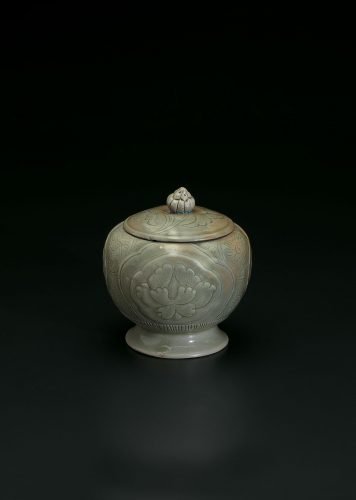 The jar is of compressed globular shape raised on a high splayed foot, the rounded shoulder incurving to a flat mouth rim that receives the slightly domed lid. Decorating the sides are three frilled peony blossoms carved in rounded raised relief, each framed by a quatrefoil medallion set within a larger quatrefoil on a ground of incised scrolling tendrils resembling fiddle ferns above a sharply cut petal band that circles the vessel above the splayed foot. On the cover is an unusual carving of a stem issuing three flowers that encircle the realistically carved lotus-bud knob. The glaze varies from silvery light blue to olive green and extends onto the interior of the foot rim. The recessed base has some sand adhering, indicating the position of the stand on which the vessel was fired.

Two similar jars have been published, both now without their lids, in the Shanghai Museum and both ascribed to 10th century during the early Northern Song period (figs. 1-2). A similar vessel on a high splayed foot like the present and with its lid intact is in the Ashmolean Museum and is also ascribed to the Northern Song period (fig. 3). A vessel excavated from the Silongkou kiln site, not far from Shanglinhu in the Yue ware complex, is also on a high splayed foot but the design is in a fine intaglio style, usually ascribed to the Five Dynasties period (fig. 4). Another covered vessel of similar form and lid, and supported on a relatively high foot, is decorated with carved lotus petals (fig. 5). This vessel is in the Shanghai Museum where it is ascribed to the Five Dynasties period. A shard published in the ground-breaking exhibition held at the Idemitsu Museum of Arts in Tokyo and at the British Museum in London some three decades ago is from a vessel from Yuyao, one of the major kilns in the Yuezhou region. The style of carving is similar to the present and the motifs also include a row of short vertical lines or petals, double-framed medallions, and what appear to be peonies (fig. 6). This shard is ascribed to the Five Dynasties period.

Metal ware of the Tang period is cited as a source for Yue form and decor and a silver vessel such as one illustrated here with a lotus cartouche design would have provided a model and inspiration for the present type (fig. 7).1 The Yue wares with metalwork stylistically behind them appear not to have been the preserve of one particular kiln. Rather, a number of Yue sites were active in providing high quality wares that would be available for the local Wuyue court, for tribute to the early Northern Song rulers, and for commercial consumption at home and abroad.2 It is quite uncommon for such a jar to have come down through the centuries with its own lid in tow. The present must therefore have enjoyed good care over the centuries or just good luck. 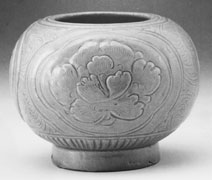 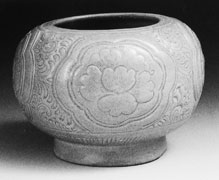 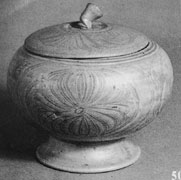 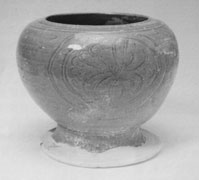 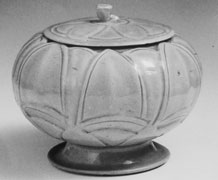 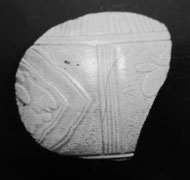 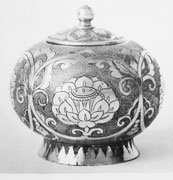