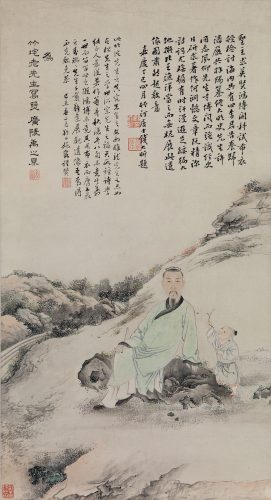 Colophons:
1) by Ch’ien Ta-hsin (1728-1804), in 1797:
“The emperor sought talent and virtue and instituted the hung-po (po-hsueh hung tz’u) examination (in 1678). Among the commoners who met the examination demands from throughout the empire were four: Master Li returned home to support his family; P’an and Yen together thanked (the emperor) for his bestowal (of awards),while the master (Chu I-tsun) agreed to work on the compilation and editing of the Ta Ming-shih, ‘History of the Great Ming.’ I have long admired the talent of the master, who was broadly read and extremely knowledgeable. He studied the classics and history every day, and his writings on (subjects) however obscure are admirable. His essays are elegant and profound, and his poetry especially graceful and attractive. Sometimes he would go wandering and his footprints covered the nine provinces. Even if compared to Wang Yu-yang (Wang Shih-chen, 1634-1711) he would not be shamed. Unrolling this handed-down portrait, his majesty calls forth respect and reverence. During the fourth lunar month of the year 1797 of the Chia-ch’ing reign-era,
inscribed by Ch’ien Ta-hisn, the Recluse of the Bamboo Stream.” Seal: Ch’ien Ta-hsin yin; Chu-t’ing Chu-shih (“The Recluse of the Bamboo Stream.”)

2) by Yao Nai (1732-1815), in 1799:
“This is a true image of Master Chu-ch’a. His writings were like carved dragons, his character like an immortal pine, his scholarship venerated by a generation, his good fortune measured by Heaven. His studies of poetry were sincere and unbiased and followed by all people, and during his lifetime his books (appeared year after year) just as autumn follows winter. Eight decades did not see the end of his life (by Chinese count), of a single generation but leaving an heritage for one hundred. The po-hsueh examination (of 1678) did not end his usefulness, for he was a commoner who received appointment as a fifth-grade official. Such a strong and active master is hard to be met with in a thousand years, so unrolling this handed-down portrait, I cannot hold back my respect and my reverence. During the second lunar month, spring of the year 1799, respectfully inscribed by Yao Nai.” Seal: Chi-ch’uan.

A green-robed man with long, elegantly-shaped fingernails and holding a fly-whisk sits on a rock, attended by servant boy who holds up a branch that seems to be blossoming plum. The background is conventional—rocks and shrubbery lining a rushing stream—and thus concentrates viewer attention on the figure, which is appropriate in such a portrait. The sitter looks out at us directly, with a confident, self-contained air, alerting us to his high status. Some influence from Western approaches to painting are visible in the use of shadow and color to model the face of the subject, who is further characterized as a cultivated and sensitive person by the gracefulness of his posture and the elegance of the lines of his gown.

Chu I-ts’un (1629-1709) was a scholar, official, poet, and bibliophile.[1] Born in Hsiu-shui, Chekiang province, his great-grandfather had been the highest chin-shih in the examination of 1583 and later served as Grand Secretary from 1620 to 1623. Chu’s grandfather and father had used up their portion of the family fortune, so during a famine in 1641 he often went without food. Marrying the daughter of a neighbor in 1645, at the beginning of the Manchu invasion of the south, the couple moved from place to place in search of safety. Despite these handicaps Chu continued to study, to teach, and to write, all of which contributed to a growing reputation and to employment as secretary to officials of increasingly high status and reputation; these efforts allowed him, in 1669, to purchase a house in his native district that he named Chu-ch’a, “Bamboo Knoll,” which he also took as his by-name.

In 1678 Chu was one of a handful of commoners who passed the special examination ordered by the emperor to seek out qualified men who had somehow not been recruited by the normal examination route. Chu was subsequently appointed a corrector in the Hanlin Academy and concurrently an editor of the official history of the Ming Dynasty. Incurring hostility because of favor shown him by the emperor—in 1683 he was appointed to serve in the Imperial Study and allowed to live in a house inside the gate—Chu was degraded in 1684 and moved to live near Liu-li-ch’ang, then as now the center for the antique trade in the capital. Although he was restored to his post in 1690, two years later he was discharged again. During all of this time Chu I-ts’un continued to write and publish and also to travel: to Fukien, Kuang-tung, and especially Suchou, where he was often the guest of Governor Sung Lo (1634-1717).

Famous in the historical and archaeological fields, Chu was also a prolific poet and a very important bibliophile. When the Ssu-k’u Ch’uan-shu library project was instituted in 1773 under the emperor Ch’ien-lung, Chu’s descendants presented 65 works from the family library. All in all Chu I-ts’un was a most admirable person, one who overcame early challenges to achieve great success at court, all the while continuing the research and writing on which his reputation is based today.

The authors of the colophons here are extremely well qualified to understand and to write about Chu I-ts’un. Ch’ien Ta-hsin (1728-1804), historian, high official, and collector, passed the palace examination in 1754 and in 1757 became a compiler, frequenting the Liu-li-ch’ang area in which Chu I-ts’un had lived. Like Chu, he became a connoisseur and collector of inscriptions on metal and stone works of art. Yao Nai (1732-1815), scholar, historian, official, and calligrapher, served with Ch’ien Ta-hsin on the editorial staff for the compilation of the catalogue of the Imperial Library, the Ssu-k’u Ch’uan Tsung-mu t’i-yao.

Yu Chih-ting, the painter of this intriguing portrait, was born in Yangchou, Jiangsu province, and became widely famed as the pre-eminent portraitist of his day. Yu studied painting as a youth with Lan Ying (1585-1664 or later) and it was probably through the Lan family that Yu met the high official and important collector Kao Shih-ch’i (1645-1703); a group portrait painted by Yu in 1684 includes Kao and Lan Shen, the son of Lan Ying and a classmate of Kao. While the influence of Lan Ying can be discerned in especially the landscape elements of Yu’s earlier paintings, it was the figure style of Ch’en Hung-shou (1598-1652) which had a more lasting effect on Yu. Ch’en’s supple and graceful style of drawing, which features continuously curving lines, was melded by Yu with the Western-influenced, color-modeling style of Tseng Ch’ing, the most famous portraitist of the previous generation.

Among the five scholars portrayed in one of Yu Chih-ting’s earliest paintings were Wang Shih-chen (1634-1711) and Hsu Ch’ien-hsueh (1631-1694), both of whom figured prominently in Yu’s later career. It was likely Wang Shih-chen, Yangchou’s foremost poet, scholar, and official of the day, who recommended Yu for service in Peking. By the early 1680s Yu was working in the Court of State Ceremonial as an adviser on etiquette to guests invited to state banquets; the position was not to Yu’s liking, according to one biographer, nor did it make any use of his skill in painting. However, neither did it prevent Yu from accepting the many private commissions on which his fame is based, and the state ceremonies did bring him into contact with the high officials who became his patrons. As the legend of one of Yu’s seals notes: “I must meet a superior gentleman before I paint a portrait.”

Despite wide appreciation of Yu’s artistic abilities, however, he was still a professional painter whose social status was far lower than those of his subjects, and at times he was treated accordingly: “One day a kinsman came galloping up to summon him with great urgency. Yu Chih-ting was a southerner and hence not a good rider, and in addition to the rush and hurry he was already weary and flagging. When they arrived at the palace, the ceremonial reception had hardly begun when the order was given for him to paint a small portrait. Kneeling on a woven mat he moved his brush and painted. Concluding that he had been demeaned…he thus decided to return home.”

Yu did leave the capital, around 1690, and on his departure received a poem from the well-
known scholar Chu I-tsun, the subject of the present portrait:

“The consulting official intends to go and live at Tung-t’ing,
this idea has been pondered for more than six years;
After you leave the Western Hills first plan the house,
a small building will hold your boat-load of books.”

On arrival at Mount Tung-t’ing on Lake T’ai, Yu joined his old patron Hsu Ch’ien-hsueh, who had retired there in 1690. In one collaborative work Hsu wrote the Mao-shih poems that accompany Yu Chih-ting’s copies of illustrations done originally by Ma Ho-chih of the Sung dynasty. Yu is often said to have adopted the so-called orchid-leaf line of the T’ang master Wu Tao-tzu, but it is far more likely that his knowledge of this motif was derived from Ma Ho-chih.

By the late 1690s Yu had returned to Peking where he did several collaborative works with Wang Hui (1632-1717) and painted portraits of such luminaries as Wang Shih-chen, Sung Lo (1634-1713), and Wang Yuan-ch’i (1642-1715). Although frequently placed in generalized and idealized settings, the eminent officials, scholars, poets, and artists of Yu’s portraits were each individually characterized by realistic depiction of their faces, while often subtle and oblique allusions placed them effectively within larger social, economic, and cultural contexts.