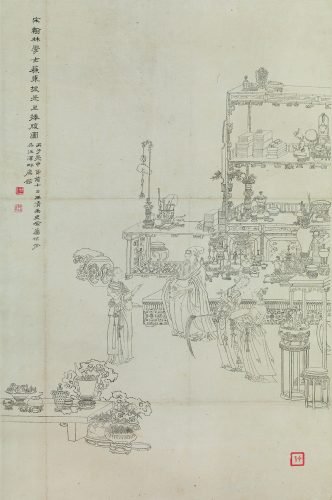 Inscription:
“Ten days before Tianzhongjie (the 5th lunar month) of the year 1756, painted by You Lan, court painter in the Xiqing Palace, at the Zheban Hostel at Wujiang.”

Within a scholar’s study, featuring shelves upon which rest books and various scholarly objects, stands a robust figure in scholar’s robe holding up his stomach before a young woman who holds up a finger, seemingly in instruction; two other female attendants stand to one side. Behind the figures is a raised dais with brocade and tassels on the sides, laden with antiques including tripod vessels, archaic style bronzes, wine pots, and a fu lion all raised on elaborate carved stands. Beyond the dais is a tall openwork display cabinet made of bamboo and inlaid with dali stones, with a shelf full of further tripods, washers, and a vase of fruiting pomegranates, a second shelf above holding books and scrolls, coral and a suspended hardstone shield-shaped vase, a fangding, wine pot, and table screen. On top of the cabinet are a bell, an archaistic vase and a censer. A long table to the left has a “cracked ice” stretcher with scholar’s articles on the top and scrolls as well as more handscrolls and books. A barrel-shaped stool and root wood seat are to one side with a four-legged stool behind. On the top of a low kang table in the foreground is a large bowl of finger citrons, wine vessels, censers and a large deep bowl filled with fruit. The scene of a scholar’s study is completed by ornamental rockwork placed in front with grass and bamboo plantings in jardinières.

The subject of this intriguing scene is identified by the artist as “Su Shi Holding up his Stomach.” According to one version of the story, Su had returned home from the palace and, after dinner, roamed the room, passing his hand over his belly, asking his servants “Can you guess what makes my stomach full?” One of them answered: “Writings.” Su shook his head, showing his disagreement. Another replied: “Knowledge.” Su again shook his head. At last a servant girl named Zhaoyun answered: “It’s that a scholar like you doesn’t fit with the times.” Su Shi was content and kept laughing.

You Lan was born in Tonglu, Zhejiang province, and became a painter in the Court Academy, supplying the inner palace with paintings. Attached to the Xiqing Palace, according to the inscription here, You Lan served in the Nanshufang, the imperial study where the antiques of the Qianlong emperor were stored. Excelling in painting figures, especially those of women, You Lan is said to have used Western methods in doing architecture, and it can be noted that in the present painting, the perspective drawing of the dais, tables, and display shelves follows the western approach to perspective. It was also noted of You Lan that the ancient bronze vessels, tea implements, and wine vessels he painted were all accurate and in accord with the ancient types, and of course as a court artist directly serving the emperor he may be expected to have had direct access to early examples of those subjects.

Most striking here is the form of the paper on which the work was painted; rather than consisting of one continuous sheet, a number of smaller sheets were joined together, leaving the joins undisguised. This indicates that this is not a finished painting but rather a study for one, a preliminary drawing in which the spatial relations were worked out to the artist’s satisfaction. More important, of course, was the emperor’s satisfaction, and this drawing was clearly made for submission to the emperor for his approval before the finished work was undertaken. You Lan’s biography states that all of his finished paintings bear an imperial seal reading: “Passed by imperial scrutiny.” This practice of requiring court artists to submit drawings to the ruler began at least by the time of Huizong (1082-1135, r. 1101-1126), and the present painting is very rare and valuable evidence that the practice continued into Qing dynasty times.