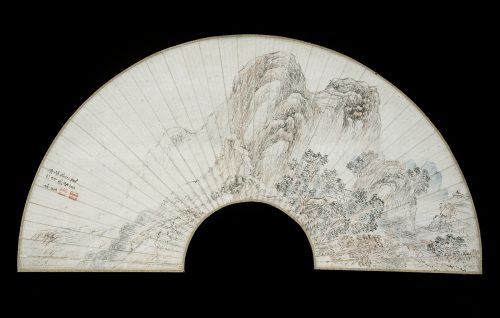 Artist’s inscription:
“On the sixteenth of the sixth lunar month of the year 1773 during the Anei reign-era, painted by Shunsei.”

The highly unusual, fully half-round shape of this fan places the viewer precisely at the center of the composition, the main lines of which all radiate outwards from that point. To the right are houses nestling beneath the cover of protective trees and a viewing pavilion poised on a plateau overlooking a misty valley. In the center rise tall peaks around which winds an empty road, while to the far left willows protrude from a sea of clouds. A warm-cool color scheme runs throughout the painting, arranged in a formalized alternation for abstract rather than merely naturalistic purposes. The lineament appearing in the painting is extraordinarily varied and supple, ranging from quick staccato accents to elegantly pulsating contour lines for trees and rocks. The forms are all convincing renditions of three-dimensional objects as is the pictorial space in which they are so persuasively arranged. Although small in scale, the painting thus stands as a significant work by a major artist.

Listed solely as a painter in the Heian Jimbutsushi, “Who’s Who in Kyoto,” for the years 1775 and 1782, Yosa Buson, the painter of the present “Mountain Retreat in Summer” was introduced as an excellent haiku poet by Masaoka Shiki (1867-1902) and by the time of Hagiwara Sakutarō (1897-1979) he was ranked second in poetry only to Matsuo Bashō (1644-94), a poet greatly admired by Buson. As a painter Buson is ranked with Ike Taiga (1723-76) and credited with a major role in bringing the Nanga school of painting to maturity.[1] Buson was therefore a true literati artist, a man of exceptional talents who made significant contributions to two complementary but still distinct fields.

Born in Kema Village, in Ōsaka, Buson was originally surnamed Taniguchi, and his father seems to have been a prosperous farmer. There is no indication of how or when he first became interested in haiku poetry or painting but by 1735, at age nineteen, he was already in Edo, where he is said to have dissipated a small fortune and to have trained as an actor. In 1737 Buson became a disciple in poetry of Hayano Hajin (1677-1742), a follower of the Bash lineage. Buson also studied Chinese poetry and the classics under Hattori Nankaku (1683-1759), an associate of Gion Nankai (1677-1751). Nankai had learned Chinese painting styles from the Hasshū Gafu and Kaishi- en Gaden, wood-block illustrated books imported from China, which Nankaku criticized as being vulgar and not up to the standard of Edo painting, an understandable reaction since Nankaku’s father was close to Kanō Einō, a master of the Kanō school. Since Nankaku had studied the Kanō style, it is probable that Buson too began by learning that manner.[2]

Two works from Buson’s earliest period are still extent: a drawing inserted in the Haikai Uzuki Teikin (“Household Precepts for April”) selected by Toyoshima Rogetsu in 1738 (fig. 1); and “Haisen Gunkai-zu” (fig. 2), which uses precise and thin lines to depict fourteen sages of haiku beginning with Moritake and Teitoku and ending with Kikaku and Ransetsu. Already at this stage Buson’s future direction in haiga painting is clearly discernible in the abbreviated and simplified forms.

After his teacher’s death in 1742, Buson left Edo and, accompanied by a friend named Isaoka Gantō, traveled throughout the Kantō and Tōhoku regions. In 1751, after years of roving, which included one trip that traced the route described by Bashō in his Oku no Hosomichi, “The Narrow Road to the Deep North,” Buson settled in Kyoto. Among his finest poems composed during that period of wandering was a free-style work written in memory of Hayami Shinga, a wealthy sponsor of the artist. Signed “Priest Buson, praying one hundred times,” the poem reads, in the translation of Donald Keene:

“Mourning for my Old Friend Hokuju”

You went away in the morning; in the
evening my heart is torn a thousand ways.
Why have you gone so far?

Longing for you, I went to the hills with
nothing to do.
Why have the hills become so sad?

Amid the yellow of the dandelions the
purseweed bloomed whitely.
No one was looking at them.

There must have been a pheasant
somewhere—when I heard it sing so piercingly,
I remembered I had a friend who lived
across the river.

A wraith of smoke dropped down all of a
sudden and was caught by the west wind blowing
Fiercely, but in the fields of bamboo and of sedge
It had nowhere to escape.

I had a friend. He lived across the river.
Today Not even the pheasants are calling.

You went away in the morning; in the
evening my heart is torn a thousand ways.

Why have you gone so far?

To the Amida Buddha in my hut I offer no candles,

No flowers, but this evening, as I stand there dejected,

I feel a special holiness.

Professor Keene identified traces here of classic Japanese literature as well as influences from Chinese and Buddhist sources but concluded that “nothing remotely resembles the quality of this poem,” that “Buson’s irregular lines suggest emotions too powerful to fit into the normal pattern of alternating lines of five and seven syllables. Although he broke every ‘rule’ of Japanese prosody, the result is unmistakably poetry, written according to the rules of internal necessity.”[3]

Living in Buddhist monasteries in Kyoto, and active primarily as a poet creating a most original lyric world, Buson continued to study painting, learning from the treasures of Chinese and Japanese art held in temple collections. While visiting the Daitokuji on one occasion Buson was impressed by a skillful painting of a bulbul and composed a haiku poem in which he alluded to the painter, Kano Motonobu (1476-1559), in terms of admiration.[4] Buson’s own paintings from this period include screens in the Gukyo-ji of “Ink Prunus” (fig. 3) and “Country Villas” (fig. 4). The first of these shows some sharpness in brushwork but Buson’s style had not yet matured; the second is painted in the conservative Kyoto Kanō-school style.

In 1754, after three years of living in Kyoto, Buson left again and moved north to Tango province, to the district of Yosa where his mother had been born. In Miyazu Village Buson associated with Chikkei, abbot of Kensho-ji, the Pure Land temple in which he lived, with Rōju of Shirisho-ji, and with Ryoha of Muen-ji, all of whom were excellent haiku poets. During this period Buson became more involved with painting than before, pursuing his studies through earlier paintings held in local collections, through wood-block illustrated books, and through the paintings Sakaki Hyakusen (1698-1753) had done during his stay in the district. Working in a range of styles, Buson painted both secular and Buddhist figure paintings, landscapes, and flower-and-bird compositions. “Tea Shop in the Country” (fig. 5) is in haiga style and seemingly influenced by Hanabusa Itch (1652-1724), whose works Buson might have seen in Edo. “Seasonal Agriculture” (fig. 6) is a traditional theme, common since the Muromachi period, though here combined with ideas from Chinese prints, and “Crows in Late Autumn” (fig. 7) demonstrates something of the direction his style would take in later works.

Returning to Kyoto in 1757, Buson determined to live as a professional painter and changed his surname from Taniguchi to Yosa, marrying several years later and fathering a daughter named Kuno, his only known child. Buson’s ambitions in art seem to have grown too, judging from a number of horse paintings he did during the early 1760s in the style of Shen Quan, Chinese founder of the Nagasaki school during his stay there from 1731 to 1733. Perhaps under Chinese influence Buson also conceived a desire to paint on satin, very expensive at that time, so his pupils organized a Byobu-ko or “Screen-funding Association” to help pay for the requisite material. One of Buson’s earliest works in the literati or Nanga school manner is a pair of screens painted in 1760 after the styles of the Chinese masters Mi Fu and Wang Meng (fig. 8). Both paintings show the effects of his period of study in Tango, being better composed than before and manifesting much improved brushwork, closer to his mature style.

From autumn of the year 1766 to 1768 Buson traveled often between Kyoto and Sanuki in Shikoku. Extant paintings in the Myōhō-ji as well as in private collections there suggest that Buson supported himself at this time by accepting many commissions in that region. Buson of course continued to be active in Kyoto in both painting and poetry. In 1766, together with the poets Taigi (1709-72), Shōha (d. 1771), and five others, Buson founded the Sankasha haiku group. Friends of the society contributed to the support of members, who in turn donated paintings to the society.[5] At age fifty-four; in the year 1770, Buson succeeded to the status of his haiku teacher, Hayano Hajin, who had died in 1742; Buson was given the title Yahantei the Second. In 1771 Buson worked together with Ike Taiga (1723-77) and produced for Shimogō Gakkai the Juben Jugi Cho, an album illustrating the “Ten Conveniences and Ten Pleasures of Rural Living” (figs. 9-10) that is one of the masterworks of later Japanese painting.

The present “Mountain Retreat in Summer,” signed “Shunsei” and dated to 1773, shares with the Juben Jugi a preference for portraying soft foliage in a casual manner that creates the impression of an intimate relationship between the artist and his subject. A monumental work from the year 1771 (fig. 11) has similarly complex mountains accessed by a sharply climbing path, again evoking an impression of an actual scene viewed under specific conditions of time and season, much as is true in haiku poems. By this time Buson had assimilated the Chinese manner of texturing rocks and mountains and dotting tree foliage and grasses and subordinated those imported features to an aesthetic ideal and lightness of touch that were purely Japanese.

The final portion of Buson’s life is called the Sha’in period after the name he adopted in 1778 and used for the rest of his life. The stronger effects in paintings of this period, such as are apparent in the masterpiece “Bare Peaks of Mount Gabi” (fig. 12), suggest that the new name is meant to commemorate a union of the expressionistic brushwork of the Chinese painter Hsieh Shih-ch’en (the first character providing the “Sha” of Buson’s new name) with the pictorial style of T’ang Yin (the “in” of Buson’s name). In any case, during this final period Buson was extremely productive and creative both in painting and in poetry. In 1777 he published an anthology of poetry, including a free verse travelogue combining Chinese and Japanese poems with haiku, a haiku diary with memoirs of his earlier travels to the places visited by Bashō, and his famous contributions to haiku theory.[6] In 1783 he helped organize a centennial to honor Bashō, and was active in other literary affairs. Late that year Buson visited a pupil in Uji and took cold in the winter rains. Becoming ill he was tended by two of his pupils, Baitei and Goshun, but died on January 17, 1784. His final poem, recited to Goshun, was:

White plum blossoms—
In the night I thought I saw
The light of dawn.

Buson had earlier written the lines:

When I too depart,
I’ll adorn the master’s tomb
With dried pampas grass.[7]

In accord with this wish, Buson was buried near Bashō’s grave at the Kompukuji in Kyoto. 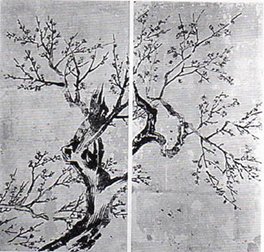 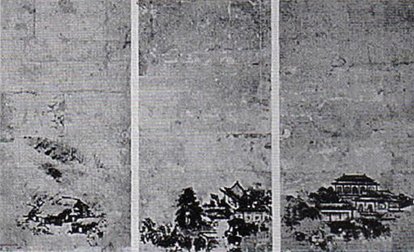 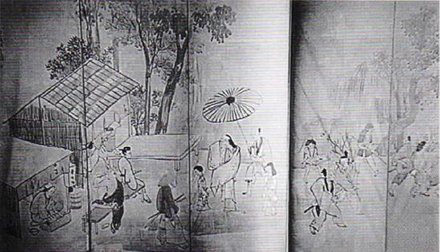 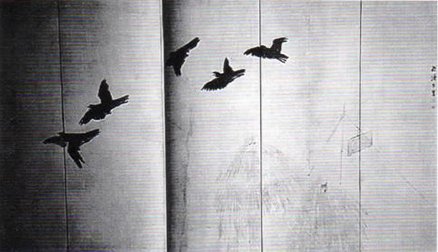 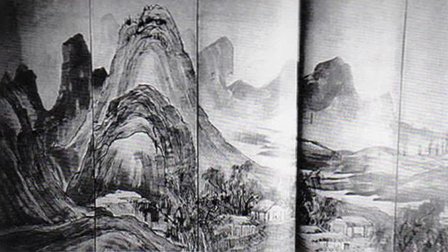