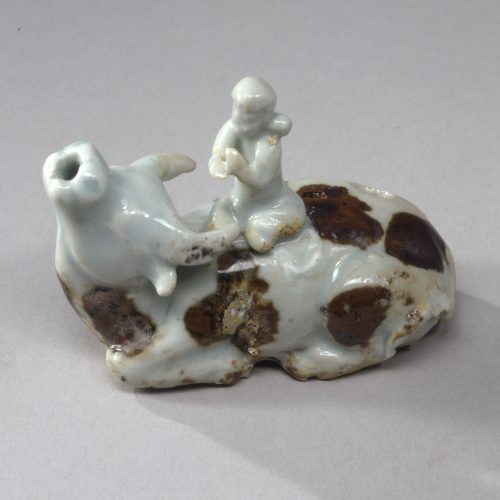 Waterdroppers were one of the staples of the writer’s craft, produced in a wide range of media. Numerous inventive forms were created, along with seemingly endless variations on basic themes, especially in the world of ceramics. Jingdezhen, whose potters thrived on challenges, produced these small necessities in what might be thought of as miniaturized ewer forms invented for the purpose of supplying drops of water to the inkstone surface to facilitate grinding the ink stick to form the liquid ink. During the Song and Yuan periods these wares were not only available on the Chinese domestic market but for export as well.

The boy-on-a-buffalo theme was popular in paintings especially during the Song-Yuan period and a fashionable waterdropper design at the same time. It was produced predominantly at kilns producing yingqing, “shadow-blue,” or bluish-white glazed white-bodied wares, but at the Longquan celadon-producing kilns in Zhejiang province as well.

Here the ox with a boy seated on its back, with the head of the beast thrown back and its open mouth serving as the spout, is casually covered, aside from its base, with a yingqing glaze and then spotted with iron-brown, a decorative technique not uncommon in yingqing-glazed wares and celadons of the Yuan period during the late 13th and 14th century, although in use earlier as well. Similar oxen-shaped waterdroppers were among a cargo that had set sail most likely from Ningpo in China in 1323 for Korea, Japan and Southeast Asia but stopped short of its destinations when it sank off the Sinan coast of southwestern Korea. The Sinan shipwreck material included ceramics that would have been put to use in a variety of ways depending upon their clients. The bucolic images, however, would have appealed particularly to a bureaucrat who wished to surround himself with reminders of life and engagements beyond the walls of his workplace. The Chan Buddhist relevance of the Boy-on-Ox theme, representing one step on the path to enlightenment, would have also been significant to a Confucian scholar, for example, who would have embraced the multiple religious or spiritual worlds available to him.