The white porcelanous figure, his handsome face mustached and large almond-shaped eyes beneath arched brows and dressed in a long belted robe and dignitary’s winged cap, stands upright on a square plinth with canted corners. The belt is detailed on the backside of the figure to suggest it was embellished by a series of jade plaques. The cap and heavy folds of the garment were enhanced with iron pigment to produce brown-colored details over the bright, transparent, pale greenish glaze. The official’s hands are clasped around a small coiled snake, one of the twelve signs of the Chinese zodiac.

The “Twelve Earthly Branches,” or houses of the zodiac were symbolized by a set sequence of animals: the rat, ox, tiger, hare, dragon, snake, horse, sheep, monkey, cock, dog and pig, which were, in a sense, the lords of time. The depiction of the actual animals as symbols of the zodiac began around the 6th century long after the concept originated. By the end of that period a hybrid creature with the body of a human and the head of the animal was created to represent each of the twelve branches. Simultaneously, images of human figures dressed in solemn ceremonial attire were created, holding the zodiacal creatures, the precedent for the most commonly encountered Song-period representations, exemplified by burials in the regions of the Jingdezhen kilns in Jiangxi, where the present figure most probably originated (fig. 1). 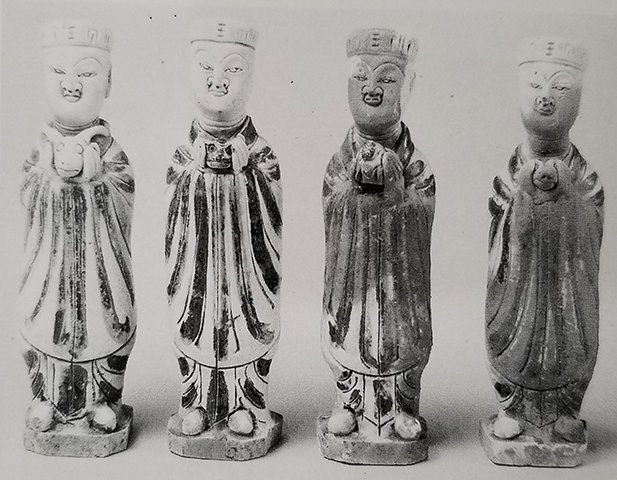