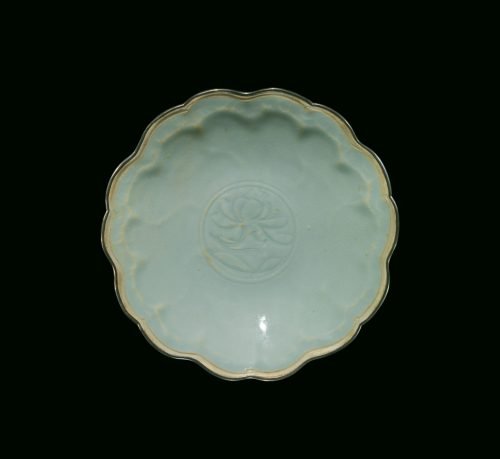 The shallow dish was pressed in a mold to create a shallow, bracket-foliate form, the foliations carried through to the wide, flattened mouth rim with its narrow raised edge. A delicate foot ring surrounds the flat, slightly recessed base. An impressed circular medallion in the center of the dish encloses a swiftly carved lotus bloom within the double outline of the medallion. A pale blue glaze that is semi-transparent and with a bright surface covers the dish overall, stopping short of the raised lip, like water to the shore, this unglazed area where the dish rested during firing revealing the hard, white porcelanous body. A narrow silver band is applied to the unglazed lip.

The silver rim protects the unglazed lip, strengthens the profile of the dish, enhances its shape, and furthermore both compliments the blue color of the glaze and enriches its effect. While a contemporary replacement, the present silver rim serves essentially the same purpose as the original, which would have been affixed to the piece soon after it was made in the 13th century to protect it from chipping and to add a bit of flair. A pair of similarly shaped dishes, each more crisply modeled yet only two-thirds the size of the present dish, were among the ceramics comprising a hoard discovered in Sichuan province (fig. 1). These ceramics were likely the shop inventory of a proprietor who tried to secure them during the invasions that brought the Song dynasty to an end. This thirteenth-century ‘Time Capsule’ reveals that the ceramics popular in the capital in Hangzhou, known through excavated material as well as mention in contemporaneous texts, were fashionable far away from Hangzhou and from their place of production in Jiangxi province. The Sichuan hoard consisted of over a thousand objects, predominantly ceramics from Jingdezhen and the Longquan kilns. None of the illustrated examples available from that find have silver rims although the bowls and dishes have unglazed lip rims and some show residue from what must have been silver banding the unglazed lips.[1]

The center of production for these wares was in Jingdezhen, in Jiangxi province. A stack of dishes, in fact, similar to the distinctive bracket-lobed type here is illustrated in a report from the important Hutian kiln (fig. 2). The dishes must originally have been fired in an inverted position resting on their lip rims in a stepped sagger, yet the stack collapsed during firing.[2]

2. For two further examples of what appears to be an uncommon type today see Bright as Silver; White as Snow: Chinese White Ceramics from Late Tang to the Yuan Dynasty, from the Kai-Yin Lo Collection, Hong Kong, 1998, pls. 34-35.