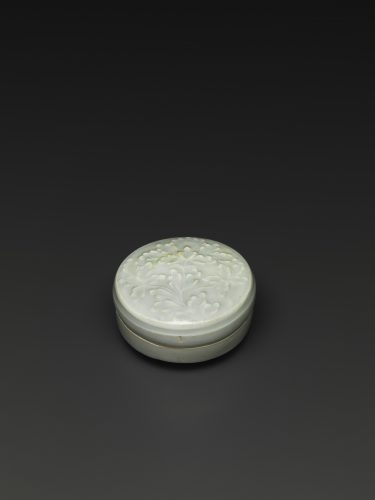 Among the great numbers of round yingqing covered boxes the present is distinguished by the crisp modeling of the raised relief design and and the graciousness and delicacy of the design. The posturing of the large peony blossom with ever so slight bow to the right along with its large and smaller leaves, evokes a sense of naturalness, as if a fresh breeze had briefly blown through. Such boxes were exported to Korea, Japan, Southeast Asia and the Philippines where they were put to a variety of uses determined by local customs. A closely related example illustrated here was excavated in the Philippines (fig. 1). Wherever scholars required containers for seal paste or powdered incense, the boxes were easily put to that use too. The great numbers of surviving examples along with extensive remains of such boxes at kiln sites at Jingdezhen indicate the immense popularity of the type, the example illustrated here with a peony design related to the present (fig. 2). The petals and leaves in both appear tipped in high-relief “droplets” and are further detailed with fine veins. The bright, smooth, light-blue glaze of the present box has drained from the tips of the petals and leaves, resulting in a thin coating that clearly reveals the white porcelain body beneath, creating highlights against the blue. Both the interiors of the box and lid are glazed. An irregular rust-colored ring on the unglazed base resulted in firing. 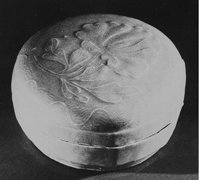