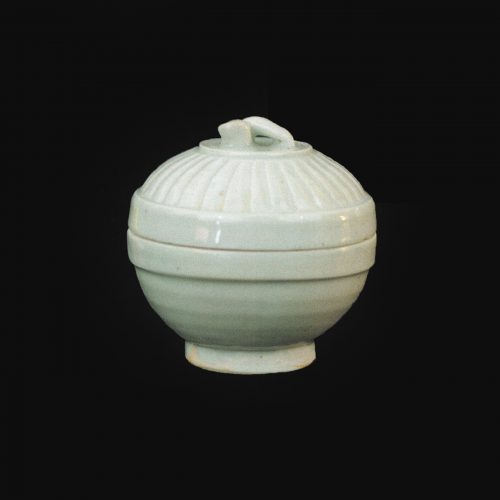 The circular receptacle and lid are of approximately the same size and the diameter equal to the height of the covered box. The well-proportioned ceramic contributes to a sense of grace and perfection established by the fine potting and restrained decor. The receptacle is formed as a bowl with deep rounded walls, a high square ring foot, a flat recessed base, and a wide raised band below the lip. The lid is essentially similar in shape, with a band mirroring that of the receptacle above the lip. The curved sides, however, are sharply fluted and capped by a flattened disk form supporting a stem-like knob. The exterior of the receptacle and lid are covered with a bright, clear glaze of faint blue color. The body exposed on the unglazed base and interiors of lid and receptacle is pure white, matte in appearance, and powdery in texture.

A vast quantity of multi-functional boxes was produced at kilns specializing in yingqing and related wares in the southern half of China during the Song and Yuan dynasties. The most refined of these ceramics would have likely found their way to the boudoirs of aristocratic women in China or to the desks of scholars and artists and some eventually into their tombs. Boxes spanning a great range of styles and quality were also exported to China’s neighbors, from Korea to Japan to Southeast Asia.

Boxes were used in Korea as they were in China, by a Korean elite that was enormously adept at emulating the traits and traditions of its neighbor, whereas in Japan they were included in sutra burials, while in Oceanic environs they might be strewn over the bodies of the deceased like gifts of precious jewels or fragrant flowers bestowing honor. Many of these millennium-long resting places have in recent time been unearthed giving some sense of the scope, the popularity, and the versatility of the ceramic boxes.

While Jingdezhen in Jiangxi province was at the hub of yingqing or qingbai ware production, kilns in neighboring provinces followed suit, producing what was a popular type and entering into the booming international trade. Among the most successful of these kilns were those located at Dehua in Fujian province, known particularly for the Blanc-de-Chine porcelains of the Ming and Qing dynasties. The products of the Song, although similar in shape to the Jingdezhen wares, exhibit ceramic bodies that are distinctly different form the dense, glassy porcelanous Jingdezhen wares. The covered box here is a perfect representative of the Dehua potter’s materials and craft during the Song dynasty.