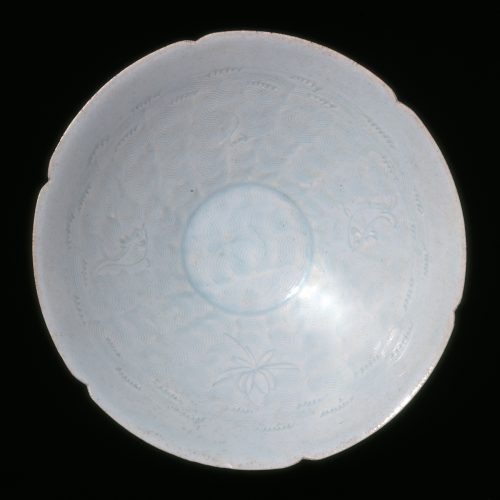 The thinly potted bowl is conical in shape with straight sides rising at a sharp angle from the foot to the straight rim notched at six equidistant points. The delicate foot ring surrounds a recessed base with a rusty discoloration from the round ceramic pad that supported the bowl during firing. Two plump fish with bifurcated tails and extended fins breach the waves on two sides of the bowl’s interior, while a blossom floats on the water between them, all incised with great delicacy and restraint. Their watery world churns from the well at the bottom of the bowl, vertical columns of waves produced by short swipes of a fine-tooth comb and flowing into each other at the top where the surf is further defined by more deeply incised scalloped lines, the scene terminating well below the mouth rim. The glaze is thin, clear, and bright, with a light bluish tinge. The dense, white, glassy body is revealed where the inner foot is slightly marred by a small chip.

Paired fish, symbols of connubial bliss, are well known from ceramic design of the Song-Yuan period and especially through the celadon dishes produced in great quantity at the Longquan kilns of Zhejiang province. At Jingdezhen the motif was far more commonly produced in molded than in incised wares. In contrast to the rich ornamental air of the molded decor, the incised design of the present bowl is characterized by its subtlety and easy somewhat natural air.

The subtle foliate form of bowls produced during the Song period at Jingdezhen might have originated in part by way of a purely technical procedure: the cutting or notching of the lip rim at regular intervals to prevent the all too common warping of the white porcelain stone that was the standard material of fabrication. This is not to say that the lobing present in splendid Tang and imported silver work did not play a crucial roll in the origin and development of foliate and lobed forms in ceramics. The present bowl, however, is a good example where the notching might well have had a technical rather than aesthetic origin and while it does add another dimension to the aesthetic attractiveness of the shape, it is a remnant and reminder of the resourcefulness of the Jingdezhen potters during the Song period.