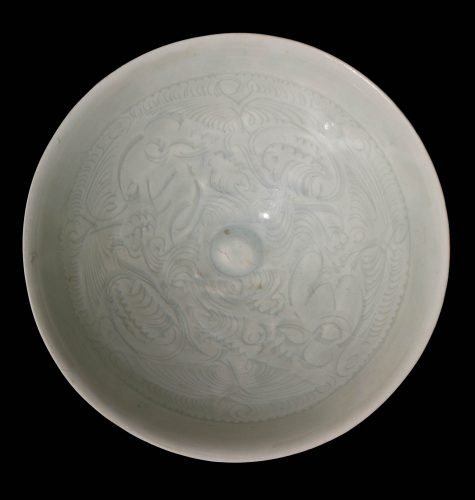 Yingqing Bowl with Incised Design of Boys within Floral Scrolls

The bowl is very thinly potted, light in weight and translucent. It is of deep form with its gently rounded sides rising from the small well-finished ring foot. On the interior the glaze pools in the center forming a blue medallion which is surrounded by combed and carved decoration encircled by a frilled edge ending well above the plain rim. On close examination the design is revealed: two large-headed baby boys opposite each other, tumbling amid two large lotus blossoms with combed petals and leaves. The outside of the bowl is plain and pristine and the glaze overall is a bluish white of great brightness and clarity. The glaze covers the delicate foot rim, and aside from its perimeter, the base is unglazed indicating that the bowl was, typically, raised on a pad during firing.

A bowl similar to the present was published from the Southern Song hoard excavated at Suining in Sichuan province.1 This extraordinary group of wares, which had been accumulated as shop inventory by a 13th-century merchant, consisted primarily of Longquan celadons and the bluish-white glazed wares of Jingdezhen. Another boy-decorated yingqing bowl was excavated from a Southern Song tomb in Jinjianshan, Linchuan City, in Jiangxi province, close to the birthplace of these wares.2 A good number of examples of such popular Southern Song period boy-decorated bowls exist in museum collections around the world . They not only beautifully represent one aspect of that era’s special aesthetic flavor but are also in some measure the result of the commercial savvy directing porcelain production at that time.