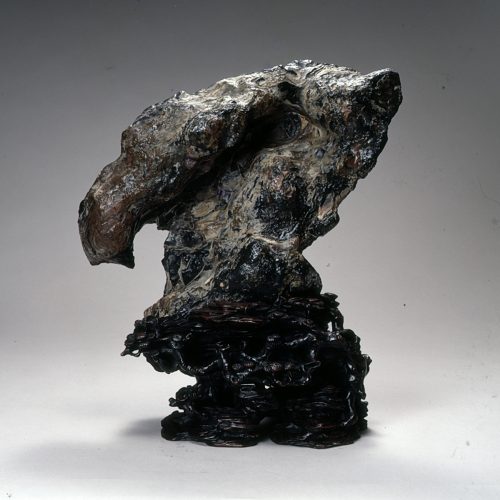 While appreciation of rocks dates back to at least the Han dynasty and perhaps earlier, the first publication devoted exclusively to the subject was the Yunlin shipu, “Stone Catalogue of Cloudy Forest,” a manual written by Du Wan published in A.D.1127. While many rocks described there and of note in subsequent writings were found compelling due to their similarity to actual landscape, rocks were also notable if they resembled real or imaginary animals. Those noted by Du Wan, for example, include a crouching sheep, tortoises and snakes, as well as dragon fangs and dragon tails. The present looks as if an eagle has perched upon it, balancing on the heavily furrowed fabric of the ying stone, and bending downward to eye the pine branches below.

Whether used on a desk to invite contemplation or placed on the study or studio floor to bring something of the outside within four walls, or situated in just the right place in a courtyard or garden to create the feeling of a special landscape in a confined environment, rocks were found, acquired, appreciated and esteemed by the Chinese. Rocks were, in fact, preeminent among “found” objects, kings within the world of “art” created by nature. Many are provided with stands designed specifically for them. As noted by the great collector of scholar’s rocks, Robert Rosenblum, “….A rock is also transformed by its mounting. When it is removed from its stand, it converts back into a natural object. When it is replaced on its stand, it is transformed from stone to art….” (Kemin Hu, The Spirit of Gongshi: Chinese Scholar’s Rocks, Newton, Mass. 1998, p. 14). The stand of the present work is well carved to produce images of layered earth combined with pine branches and clustered needles, providing a naturalistic environment for the rock and the eagle born from it.