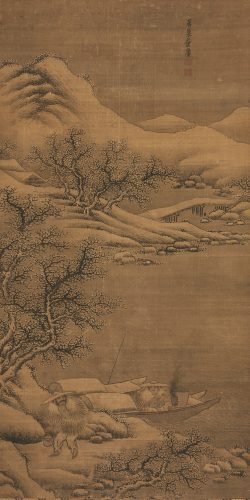 Yeh K’uang was from Ch’ao-hsien in Anhui province. His earliest known work, which dates to the year 1597, is signed “the monk Yeh K’uang,” which may indicate that he was a lay follower of Buddhism during his early years.

Six of the eight paintings by Yeh K’uang presently known, including the present “Fishing on Winter River,” focus on fishermen and their various activities, and one of Yeh’s by-names means “sea-fisherman,” another indication of at least a close emotional association with that profession. Such portrayals of the apparently unconstrained lives lived by these simple people must have had special appeal to the inhabitants of increasingly crowded cities during the late Ming period.

The figure types appearing in Yeh’s paintings, especially their facial physiognomies, which feature eyes set far to one side of their sockets, is characteristic of a number of Nanking artists of the 16th century and this establishes the source of some elements of Yeh’s style. Especially noteworthy in the present “Fishing on Winter River” is the subtle and very skillful rendition of smoke rising above the frozen river from the charcoal brazier on board the river skiff.