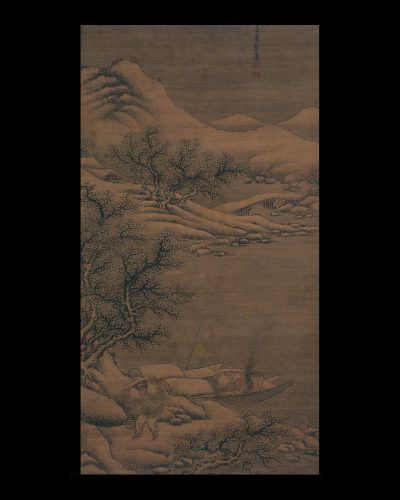 “Fishing on a Winter River” 冬河鈞徒図

Ye Kuang was from Chaoxian, Anhui province. His earliest known work, which dates to the year 1597, is signed “the monk Ye Kuang,” suggesting that he either was in fact a monk or possibly a lay follower of Buddhism. A number of Ye Kuang’s later paintings bear a seal reading “Red City Mountain Man,” which suggests that he lived for a time near Mount Tiantai in Zhejiang, since Zhicheng or Red City is the name of a mountain passed by all those who would climb the sacred peak.

Six of the eight paintings known to be of his hand, including the present “Fishing on a Winter River,” focus on fishermen. The portrayal of the unconstrained lives of these folk, their world seemingly uncomplicated among streams and mountains without end, must have had special appeal to the inhabitants of increasingly crowded cities during the late Ming period and one can thus imagine Ye Kuang’s paintings to have been in some demand.

Interestingly, the facial physiognomies of his fishermen, which feature eyes set far to one side of their sockets, are characteristic of a number of Nanking artists of the 16th century, as are certain other features of his work. Especially noteworthy in the present “Fishing on a Winter River” is the subtle and very skillful rendition of smoke rising above the frozen river from the charcoal brazier on board the river skiff. The subject of the painting, however, fishermen in a wintry landscape, brushed by and large in ink only, conjures the ultimate source of this enduring tradition, Wang Wei.