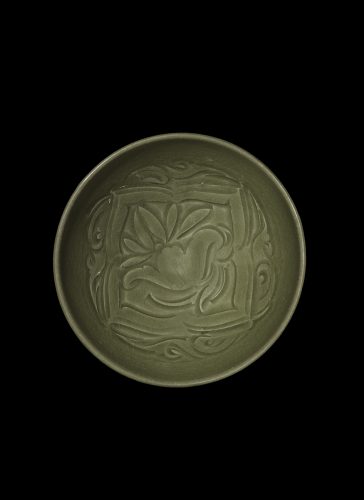 The curved walls rise from a square-cut ring foot, ascending to a wide mouth with double grooved rim. The deeply carved decoration consists of a large quatrefoil frame bordered by detached scroll segments and enclosing a lotus blossom with pointed petals atop a large leaf. The olive-green glaze is crazed and suffused with tiny bubbles throughout. The decoration is enhanced by the depth of the carving, which results in contrasting shades of green and an intensity of color in the more deeply carved areas of the design. The smooth dark grey stoneware is visible on the unglazed foot surrounding the recessed based splashed with an iron-brown wash.

The quatrefoil frame, the centerpiece of the decoration, is not commonplace among ceramics produced in the northern strongholds of celadon production during the Song-Jin period. We rarely encounter the device whether in the holdings of public or private collections or in publications. The few examples include those decorated with an ox, a chrysanthemum blossom, or small florets all within quatrefoil frames. These examples are also related to each other through a similar bold carving technique with the designs on clear rather than combed grounds and with brown washes on the bases. These are generally attributed to the Jin dynasty during the 12th to 13th century A.D., while a published fragment with carved lotus and leaf similar to the present was excavated from a Jin-Yuan stratum at the Tongchuan kiln in Yaozhou in Shaanxi province.[1]

The lotus, a subject that carried the weight of profound significance from its Buddhist associations, was given a prime position here mainly because of its great beauty and literary connections. The strong, definitive forms of the blossoms and leaves lent themselves most perfectly to the skills of the Yaozhou potters. The quatrefoil frame derives from Tang metalware and becomes a major decorative and organizational device especially in Yuan dynasty wares, from the Cizhou products of the north to the cobalt-blue decorated porcelains of Jingdezhen. The present décor was a hint of what was to come.