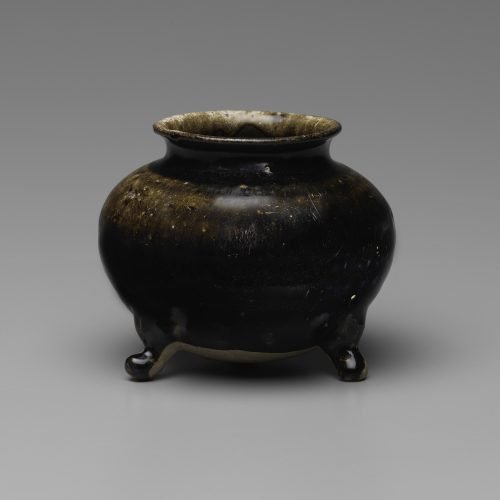 As noted in the previous catalogue entry, the shape of this small vessel is a later day manifestation of the early tripod developed by potters of ancient China. Here the vessel is of slightly compressed spherical form raised on three pad feet. The glaze is a lustrous black color and thins to brown on the shoulder and the rim, ending well above the flat underside but partially covering the feet. The relatively coarse, grey-colored body supports suggestion of production at a Tang kiln in the Yaozhou region of Shaanxi province, where dark-glazed wares, ranging from black to brownish hues, on grey-colored stoneware bodies were known to have been produced, predating the famed “Northern Celadons” produced there during the Song dynasty.