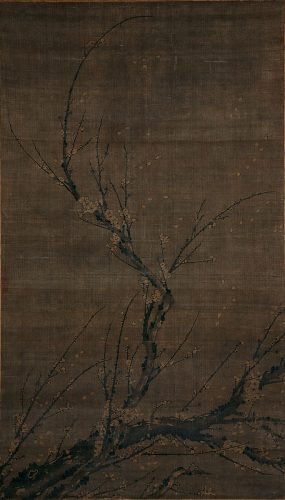 A thick branch of blossoming plum extends upward from the lower left-hand corner, additional branches and shoots rising to fill the upper part of the picture. Oriented mainly in accord with the vertical and horizontal axes of the picture, the image acquires a sense of great stability, monumentality, and nobility. of particular interest here is the use of a reserve technique in which the blossoms are left in reserve, with the unpainted silk standing for the white color of the flowers and their shape created by washing in the entire background of the picture. Particularly effective, and rare, is the use of this technique for the falling petals, capturing the ephemeral and fragile beauty of the moment.

Extant paintings of the blossoming plum range from the anonymous early 12th century “Birds among Blossoming Plum and Bamboo” (fig. 1) to works by Wang Mien (1287-1359) (fig. 2) and Tsou Fu-lei (mid-14th century) (fig.3). Viewed against this continuum of style, the present painting must be placed fairly early. Most of the present artist’s other attributed works are in small scale, for example a “Blossoming Plum” fan painting in the Tientsin Art Museum (fig. 4), which is similar in brushwork but less ambitious in size and imagery.

Yang Pu-chih (1097-1169), tzu Wu-chiu, is sometimes referred to as Yang Wu-chiu with tzu of Pu-chih. However, the earliest biographical texts recording the artist, the Hua-chi of 1167 and the T’u-hui Pao-chien of 1365, both record his name as Pu-chih and tzu as Wu-chiu; it seems not until the P’ei-wen-chai Shu-hua P’u of 1708 that the names were reversed. The Yuan dynasty text also notes that his ancestor was Yang tzu-yun of the Han dynasty, although this may have been based on no more than his use of the ts’ai radical rather than the more usual mu radical in writing his surname.

Yang’s birthdate may be calculated from the fact that the Hua-chi recorded in 1167 that he was then seventy sui or sixty-nine years old, yielding a birthdate of 1097. This date was confirmed by Chao Meng-chien (b. 1199) in a colophon dated to 1257 written on a painting of blossoming plum painted in 1201 by Hsu Yu-kung, a student of Yang Pu-chih (fig. 5). Chao further notes that Yang died in 1169, information that most likely emanated from the student. Other names associated with Yang Pu-chih on the basis of recorded and extant paintings include T’ao-ch’an lao-jen (“Elder who escaped into Ch’an [Buddhism]”), and Ch’ing-i ch’ang-che (“Senior Member of the Pure Class”).

Later writers suggest that Yang’s paintings were appreciated by Chao Chi (1082-1135), the Hui-tsung emperor (r. 1101-1126), and such is not chronologically impossible. However, there is no objective external confirmation of such a relationship; the imperial collection catalogue Hsuan-ho Hua-p’u records no paintings by Yang. On the other hand, it should be noted that the present work, in scale and aesthetic vision, is comparable to such early 12th-century paintings as Li T’ang’s work of 1124, “Whispering Pines in Myriad Valleys” (fig. 6), and looks back to such paintings as the “Bamboo in Snow” attributed to Hsu Hsi of the 10th century (fig. 7).

The provenance of this painting is worthy of special note. Until the sale of the Date family collection in 1930, the painting was owned by one of the preeminent daimyo clans in Japan. Founded during the early Kamakura period (1185-1333) by Isa Tomomune, the family took its name from the Date district (now Fukushima prefecture) in Mutsu province, which had been awarded to Isa Tomomune by the first Kamakura shogun for his assistance during the Genpei War (1180-85). Under Date Masamune (1567-1636), the clan gained greatly in importance through support of Hideyoshi and then Tokugawa Ieyasu, who awarded Masamune control of the huge and profit able Sendai fief, which made him one of Japan’s most powerful daimyo. In 1604, Masamune, accompanied by 52,000 vassals and their families, moved to what was then the small fishing village of Sendai, which he ultimately turned into a large and prosperous city.

Masamune was also a patron of the arts, and is known to have acquired ceramics from the kilns at Shigaraki. A student of the great tea-master Furata Oribe, and in accord with provisions of the Tokugawa government, “Masamune appointed an official tea master to instruct his clansmen, selecting for that post Oribe’s outstanding disciple, Shimizu Dokan (1579-1648).”1 It is possible that the present painting came into Japan at that time as part of the great influx of works from China that were destined for various daimyo.
From the early 17th century until 1868, the Date continued to hold the Sendai fief, and during the Meiji period the head of this senior clan line was ennobled as an hereditary count. During 1930, when the painting was sold at auction in Tokyo, the head of the family was Date Okimune (1906-1947).

At that auction the painting was acquired by Yamanaka Sadajiro , who in many ways represented the new daimyo business class of the post-Meiji era.2 Born Adachi Sadajiro in 1866 near Osaka, the son of an antique dealer, Sadajiro was apprenticed to Yamanaka Kichibei, a well-known dealer in Osaka. When only seventeen years old Sadajiro determined to go abroad and thus began his study of English. Eventually marrying Yamanaka’s daughter, he took the Yamanaka family name. In 1894, when Sadajiro was 28, Yamanaka sent him and his brother-in-law to New York to open a shop, which was an immediate success selling scrolls, tea ceremony utensils, inro, netsuke, statues, screens, and bronze vases. By 1899 Yamanaka & Co. had opened shops in Boston and Atlantic City, and the following year, 1900, on Bond Street in London. Sadajiro returned to Osaka but traveled frequently to the US., Europe, and elsewhere in Asia.

During the 1860s and 70s the government encouraged the export of Japanese products and Japanese participated in world expositions in London, Paris, Vienna, and Philadelphia, with the result that prominent American collectors began to pay serious attention to Japanese art. Yamanaka & Co. prospered and expanded the business to resorts in Maine, Rhode Island, Florida, and Washington, D.C. By the early 20th century Yamanaka was selling more Chinese than Japanese art, the result of Japanese government restrictions on exports and the increasing price of Japanese artwork. With the collapse of the Ch’ing dynasty in 1911 and the ensuing civil war, wealthy Chinese families began to sell their collections, while looting by soldiers and thieves who robbed graves and temples created a rampant black market.

In 1912 Yamanaka became the exclusive agent of Prince Kung, among the last of the imperial family in Peking, and Sadajiro bought warehouse-sized collections of bronzes, jades, and porcelains and sold them in New York, London, and Japan.3 In 1917 Yamanaka opened a branch in Peking and also moved into the new Rockefeller building on Fifth Avenue in New York. Relations with the Rockefeller family deepened, and in 1919 the London shop was graced with royal warrants from King George V and Queen Mary.

The 1920s and 30s saw an increasingly rapid disintegration of the Yamanaka empire, beginning with the Great Kanto Earthquake, the Manchurian incident of 1931, and the establishment of Manchukuo by Japan in Manchuria, all of which brought about economic depression in Japan and chaos in China. During the late 1920s Sadajiro had turned over seas affairs of the company over to his son, Kichitaro (1890-1965), who was faced with the challenges posed by the Smoot-Hawley Tariff Act, which imposed high tariffs on imports, and in 1939 Yamanaka & Co. was investigated on suspicion of violating customs regulations. In July of 1941, the U.S., British, Dutch, and Chinese governments froze the assets of Japanese individuals and corporations and prohibited trade with Japan. Following the December, 1941 attack on Pearl Harbor, in July of 1942, the U.S. government confiscated the U.S. assets of Yamanaka & Co. Fifty-seven thousand works of art owned by the company, worth millions of dollars, were put up for auction; the New York Times reported that the auction included museum-class artwork as well as art books and inexpensive trinkets and furniture. Sales totaled $467,000 of which $390,000 went to the government and the balance to the auction agent, Park-Bernet Galleries.

Yamanaka & Co. never recovered from the confiscation. The New York store closed in 1965 on the death of Kichitaro, and the empire was reduced to a small shop in the antique section of the Hanshin Department Store in Osaka. When I visited the shop during the mid-1970s the inventory was mainly modern and contemporary ceramics, with only a large stone head from Yunkang of the late 5th century testifying to the earlier glory of the company. The Osaka shop closed its doors in 2003.

2. The following sketch of Yamanaka & Co. was drawn from the excellent account given by Thomas Lawton: “Yamanaka Sadajiro: Advocate for Asian Art,” Orientations, January, 1995, pp. 80-93, and that by Kuchiki Yuriko: House of Yamanaka, Art Dealer Who Sold Oriental Treasures to Americans and Europeans, Shinchosha, Tokyo, 2011.

3. The ku-shaped porcelain vessel illustrated here in cat. 58 was formerly in the collection of Yamanaka & Co. and is provided with very elaborate coverings and wooden box. 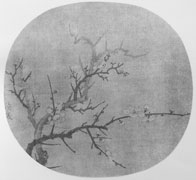