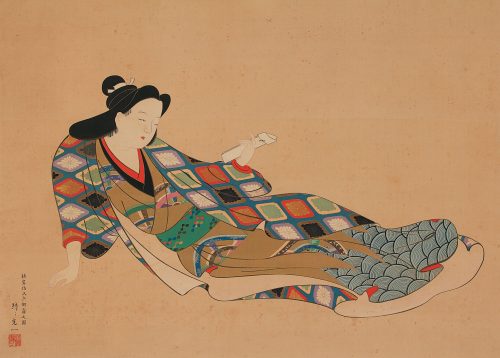 A languid beauty reclines, leaning on one arm while the other holds up a folded fan; her expression suggests that she is lost in thought, perhaps of an absent lover. The posture of the sinuous bijin was designed to allow the artist to elongate her body, the better to create sufficient space on the kimono for the display of a wonderful range of colors and patterns. The painting pays due homage to the artist’s stated model, Iwasa Matabei (1578-1650), often regarded as the progenitor of the ukiyo-e style.

The painter of this elegant work was initially held to be Kikugawa Eisho, active during the Bunsei era (1818-1830), who used Koitsu as his studio name. However, Seisei, as in the signature here, was used by artists of the Rimpa school beginning with Korin, and the ko of Koitsu was adopted from the first character of Korin’s name. Yamamoto Koitsu was the son of Yamamoto Sodo, who had been a disciple of Sakai Hoitsu (1761-1828). Koitsu and his brother Doitsu (1845-1913) were important members of the Rimpa tradition during the Meiji period (1868-1911) and may be credited with maintaining the prestige of the school in Japan while making its beauties known abroad as well.