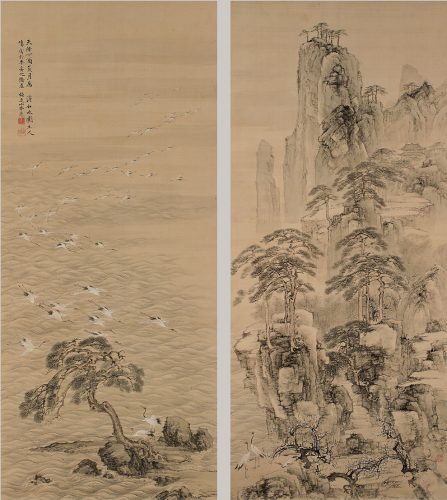 Inscription:
“In the year 1837 during the Tenpo reign era, in the darkness of the eleventh lunar month, in response to a request from the Master of Tanjyosui-en (the ‘Tranquil-as-water Garden’), Baiitsu, Yamamoto Ryu, painted this at a temporary abode in Heian.”

Dozens of cranes in the left-hand scroll fly down through the clouds and mist and over the waves toward their mountainous destination in the right-hand scroll, a precipitous mountain with blossoming plum trees at its base and pines surmounting the various divisions of its ascent. A temple or extensive villa near the summit provides the only evidence of human intrusion on the scene.

The compositions are stunning in their dramatic juxtaposition of empty with filled, of horizontal and vertical, and of active with passive, all executed at a very high level of technique. Since cranes, pines, and rocks were long-established visual symbols of longevity, it is most likely that the present pair of works, painted at the request of a patron, was intended to celebrate some very auspicious occasion.

Born in Nagoya, the son of a sculptor who served the Owari or Nagoya branch of the Tokugawa clan, Baiitsu early on evidenced talent in painting and studied with Yamamoto Rantei (1st half-19th century), a local Kano-school painter, and then with Cho Gessho (1772-1832).[1] But it was likely his relationship with Kamiya Ten’yu, a wealthy merchant and collector of old paintings, that gave greatest impetus to the development of Baiitsu’s career. In company with his close friend Nakabayashi Chikuto (1776-1853), Baiitsu studied early paintings and was introduced to the literati arts and values by Ten’yu and his circle of friends.

After the death of Ten’yu, Baiitsu and Chikuto moved to Kyoto in 1803, and quickly became acquainted with literati circles and activities in that city. Although Baiitsu periodically returned to Nagoya, he was mainly in Kyoto during the period 1832-1854 and acquired an admirable reputation as an elegant literatus, knowledgeable about the sencha tea-ceremony, collector of tea-utensils, performer with yokobue flute, and poet who composed both Chinese-style verse as well as Japanese waka. In frequent company with Asano Baido (1816-80), who served in the Kyoto Magistrate’s office between 1848 and 1852, Baiitsu attended sencha tea-ceremonies and collected old Chinese books, calligraphies and paintings. An important part of the training of a literati master consisted in studying the Chinese paintings then available, and Baiitsu as well as other Nanga masters acquired these whenever possible. In one such case Baiitsu was finally able to acquire a landscape painting by Yang Wen-tsung (1597-1654) by selling some of his family assets; Baiitsu’s copy of this, dated to 1848, is still extant. Rai San’yu (1780-1832), an important Confucian scholar of the day, heard about Baiitsu’s treasure and asked to see it. When Baiitsu arrived at Sanyu’s house, his host met him in full ceremonial dress, not for the benefit of Baiitsu, San’yo explained, but in honor of his encounter with the painting by Yang Wen-tsung.

Through their study of Chinese paintings the Nanga artists became more attuned to subtleties of materials and brushwork. Baiitsu often used a special, double-weave silk that was made-to-order for him, and another anecdote illustrates the attention he gave to brushwork. The Maeda clan in Kanazawa district had commissioned the great Edo master Tani Buncho (1763-1840) to work with Baiitsu on fusuma for their new palace. During the course of their work, Buncho, much the senior of the two, was startled when told by Baiitsu that he should use a large brush for the painting at hand but then agreed that his Kyoto counterpart was correct.

During the evolution of his style Baiitsu painted in a variety of manners, including that associated with the Rimpa school. Baiitsu himself said that brushwork and spirit were more important to the success of a painting than form alone, which if pursued to the exclusion of all else resulted only in lifeless images. In 1854, on the other hand, Baiitsu told Wada Tansai, a visiting poet, that painters in recent days sought only spiritual rhythm and neglected to describe realistic appearance. Baiitsu thus sought to portray the physical reality of his subject through naturalistic form and composition but also to suggest subjective thoughts and emotions beyond those objective forms, in this case having to do with literati appreciation of the symbolism of cranes and pines.

The assured technique, the great beauty, and the accessibility of the paintings here suggest some of the reasons for Baiitsu’s great success in Kyoto, which could not but arouse jealousy among other painters. It was undoubtedly one of these who commissioned for a large sum of money a painting on silk from Baiitsu, who naturally complied with the request at once. Somewhat later Baiitsu was invited by the same person to a banquet in Gion, where they were entertained by a geisha. As she danced, her silk underclothes could be seen to have been painted by Baiitsu,who thus undeservedly earned the unsavory reputation of being willing to paint anything for money. His friend Chikuto sought to console him with a punning rhyme that made light of the event; “From this day forward we too will look at flowers in the capital, mountain-grown plums (i.e. Baiitsu himself) from my home town”—but in 1853 Chikuto died, leaving Baiitsu with nothing to prevent his return home in humiliation. Once there, however, under the patronage of the Owari clan, Baiitsu was sought out by students and received the remuneration and honor that were his well-earned due. In 1862, six years after his death, a memorial service was held for Baiitsu at Dosenji and, in a tribute most fitting for this Nanga master, an exhibition was held of Chinese paintings done by Shen Chou, Pien Wen-yu, Yang Wen-tsung and many other literati luminaries.

1. For a biography of Baiitsu and discussion of his interest in literati subjects and activities, see Patricia Graham, Yamamoto Baiitsu: His Life, Literati Pursuits, and Related Paintings, unpublished Ph.D dissertation, University of Kansas, 1983.