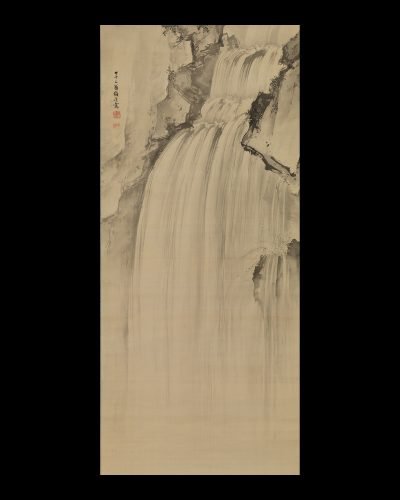 A river drops in several stages from a great height, culminating in a final section that ends in the nothingness of unpainted paper that suggests the concealing effect of mist. A few rocks are present, painted in sharp strokes done with a slanted brush to create texture. The painting is quite simple but very effective in conveying the energy and force of the falls, even suggesting the thunder of the torrent. Painted one year before the death of the artist, the work manifests the experienced hand of a master; another work by the same artist (fig. 1), painted ten years earlier, is far more detailed but also less concentrated and dramatic than the present painting.

Born in Nagoya, the son of a sculptor who served the Owari or Nagoya branch of the Tokugawa clan, Baiitsu early on evidenced talent in painting and studied with Yamamoto Rantei (active mid-19th century), a local Kano school painter, and then with Cho Gessho (1722-1832). But it was likely his relationship with Kamiya Ten’yu, a wealthy merchant and collector of old paintings, that gave greatest impetus to the development of Baiitsu’s career. In company with his close friend Nakabayashi Chikuto (1776-1853), Baiitsu studied early paintings and was introduced to the literati arts and values by Ten’yu and his circle of friends.

After the death of Ten’yu, Baiitsu and Chikuto moved to Kyoto, in 1803, and quickly became acquainted with literati circles and activities in that city. Although Baiitsu periodically returned to Nagoya, he was mainly in Kyoto during the period 1832-1854. The assured technique, the great beauty, and the accessibility of his paintings suggest some of the reasons for his great success in Kyoto, which could not but arouse the jealousy of other painters.

It was undoubtedly one of these who commissioned for a large sum of money a painting on silk from Baiitsu, who naturally complied with the request at once. Somewhat later Baiitsu was invited by the same person to a banquet in Gion where they were entertained by a geisha. As she danced, her silk underclothes could be seen to have been painted by Baiitsu, who thus undeservedly earned the unsavory reputation of being willing to paint anything for money. His friend Chikuto sought to console him with a punning rhyme that made light of the event–“From this day forward we too will look at flowers in the capital, mountain-grown plums (ie. Baiitsu himself) from my home town”—but in 1853 Chikuto died, leaving Baiitsu with nothing to prevent his return home in humiliation. Once there, however, under the patronage of the Owari clan, Baiitsu was sought out by students and received the remuneration and honor that were his well-earned due.